'This club does not belong at the bottom' 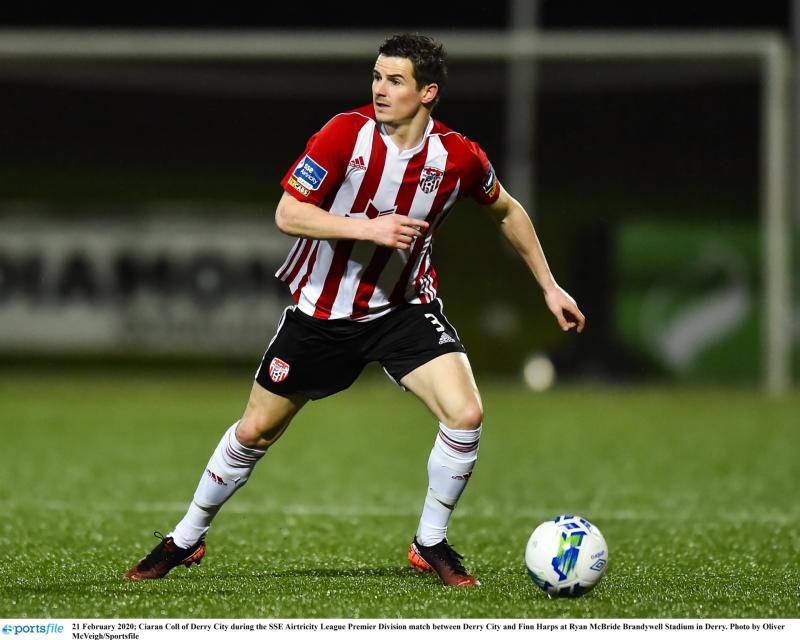 Ciaran Coll has told Derry City fans not to panic despite the club’s worst league start in 18 years, which has left them bottom of the Premier Division table.

The Candystripes are one of just two teams without a victory so far this season, with Tuesday night’s 2-0 defeat to Shamrock Rovers the latest disappointment for Declan Devine and his players.

There is now significant pressure on City to get a result against Drogheda United at the Brandywell tonight to avoid the club’s worst start in their League of Ireland history. Victory however, could see them climb a few places, and Coll believes that a win would be huge for the club in a number of aspects.

“There’s a wee bit of pressure coming into it,” he admitted.

“It’s not nice coming into a game under pressure so we have to try and take it away, and, on our home patch, start making it our patch. There are a few faces looking over the walls looking in watching us and we have to put a smile on their faces again. Hopefully Drogheda comes thick and fast and we can get the three points and get up and running.”

Despite the defeat to Rovers, Coll saw a number of positives, particularly the performances of youngsters Ronan Boyce and Brendan Barr, who started Tuesday’s game. In all, six players who came through the Academy represented the club against the champions.

“They deserve their minutes,” he said.

“If you look at Caoimhim Porter coming on, and Ronan Boyce, Brendan Barr, Caolan McLaughlin and Dixie Ferry, these players deserve their chance, because in pre-season they have stepped up to the mark and they know that Declan, Paddy, Conor and Mark will give them a chance. That’s exactly what they’ve done and hopefully they can keep driving on.

“It’s hard to take and it’s four from four but there were some positives from the game. We conceded two disappointing goals, but if you look, we had Brendan Barr coming into the team and Ronan Boyce, and then the other young lads who came in. They were all brilliant and they are a credit to themselves. They were very good but the rest of the team have to step up to the same mark they are trying to reach.”

Coll has urged the fans not to fret despite the poor start to the season, promising that the players will turn it around soon. City have home games against Drogheda and Dundalk coming up in the next five days and a good return of points could change everything according to the experienced full-back.

“Don’t be panicking too much because it’s a long season and we’re only four games in,” he insisted.

“We have experience in this team; look at Will Patching and Eoin Toal and others, we will be able to turn this around. Hopefully that’s on Friday night. We just have to regroup and that’s what we have to do. It’s our job. Tonight is another game so hopefully we can turn it around.”

“You see the boys coming in after games and there’s nearly tears in their eyes. It’s not that we’re used to winning every single game or anything like that. Shamrock Rovers haven’t lost a game in the last year. We just want to get three points on the board and get off the bottom of the table because this club does not belong where we’re at, at the minute.”

Defender Danny Lupano is set to return from suspension after missing the Shamrock Rovers game due to his red card at St. Patrick’s Athletic last week, while Darren Cole should be fit after a recent injury.