City bottom of Premier Division ahead of trip to St. Pat's this weekend 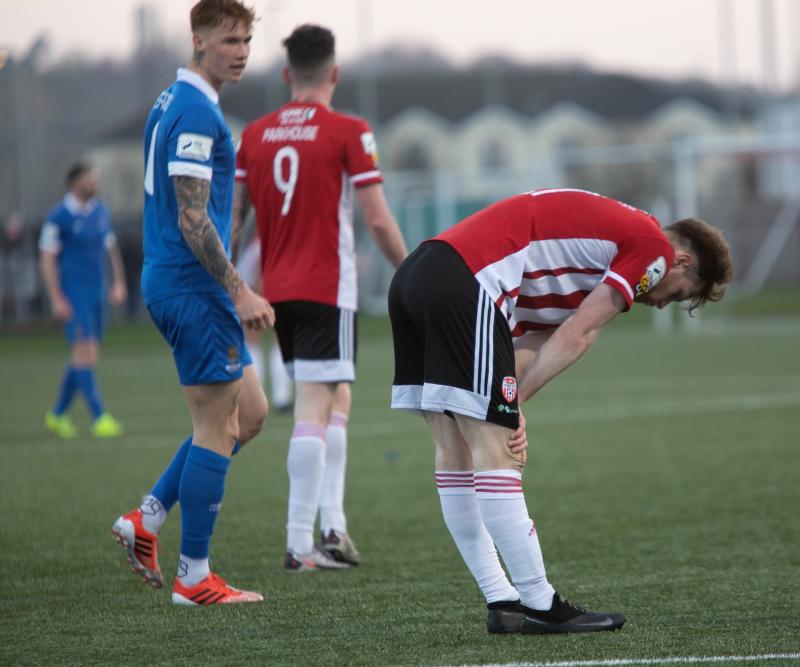 Cameron McJannett believes that Derry City will start climbing the table soon if they can cut out the ‘unforgivable’ mistakes which have cost them dearly so far.

The Candystripes remain rooted to the bottom of the Premier Division following Saturday’s 2-1 defeat to Waterford at the Brandywell. McJannett’s first goal for the club was in vain as goals from Shane Griffin and Oscar Brennan gave the visitors their first win, goals which were gifted to the Blues by their hosts.

City’s generosity at the back leaves them with no points from their opening two fixtures for the first time since 2018, and McJannett admitted that Derry had no-one to blame but themselves, holding his own hands up for his part in the second Waterford goal.

“We played quite well all in all but the goals we gave away are unforgivable,” he said.

“They were just sloppy. We gave away a free kick and it’s gone in and then the second goal is unforgivable from my part and it’s a penalty. For all the good work, we’ve just thrown it away.

It is hard to believe we’ve lost but when you look at the goals we gave away, they were as poor as you can get. We can’t say anything.”

McJannett scored his first goal for the club on his 13th appearance as a Candystripe. He is the first defender to score City’s first goal in a season since Armin Aganovic back in 2018, also against Waterford, but the versatile defender was not celebrating despite the long wait coming to an end.

“Yeah, at long last, but I don’t mean to be negative, but it feels a bit pointless at the minute because of the loss and the mistake for the goal,” he admitted. “At the time it felt nice and to get back in the game at that time. At the time I was very relieved because I felt partly to blame for the first goal as well. To get that literally with the last kick of the first half, it was a nice feeling but obviously in the second half it was a different story.”

City travel to Inchicore on Friday night and that is quickly followed by a home game against Shamrock Rovers next Tuesday, a daunting double for any team. St. Pat’s are steadily improving under Stephen O’Donnell, and sit in third place having won two of three games so far, while champions Shamrock Rovers have not lost a league game since September 2019, a run of 24 league games.

Yet McJannett firmly believes that Derry City can respond to take points from both games, insisting that the improved attacking display against Waterford shows that the team is heading in the right direction.

“We haven’t got any points from two games but we’ve said we’re sticking together and I’m sure we’ll start getting results,” he continued.

“If we can play anything like that and cut out the goals we give away, then we’ll start getting points. It will be hard but we’re sticking together and we know that if we perform like that we’ll get results. I know St. Pat’s and Rovers are good teams but that’s not to say we can’t beat them and start climbing the table.”

Poor results generally set the mood around the club and amongst the fans, and McJannett knows the importance of a positive result in the coming days.

“I know everyone will look at the result and heads will be down but the performance was good,” he added. “On another day the chances go in and we take them but we have to start taking our chances if we are to have any chance of getting higher in the table this season.”