CHELTENHAM TIPS FOR DAY 1 OF THE 2021 FESTIVAL 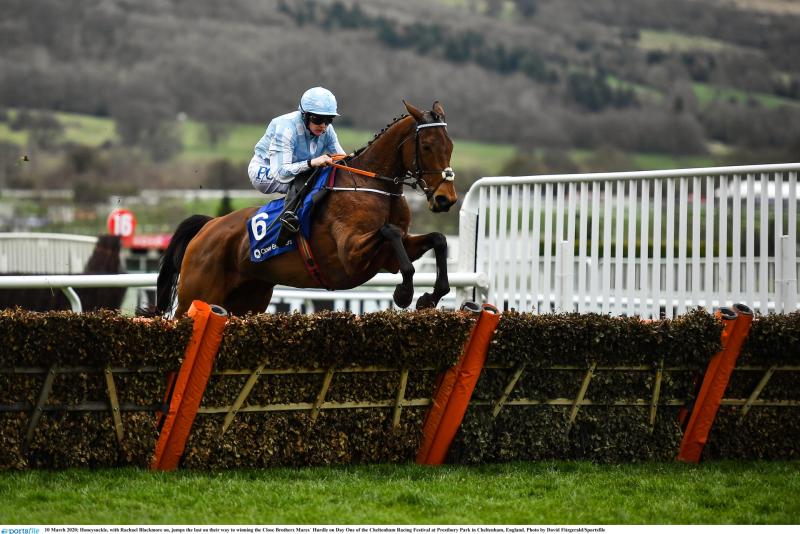 Willie Mullins trains the favourite for the very first race on the card this year in APPRECIATE IT (7/4) who should win to get punters off to a good start from their sofas. His only defeats for Willie Mullins came on debut back in 2019 at Fairyhouse and at Cheltenham last year when his colours were lowered by Ferny Hollow in the Champion Bumper. Since then, he has looked iron clad over hurdles, winning three from three, including at the Dublin Racing Festival in February where he stamped his authority on a good field which included Ballyadam, currently third in the betting market for this race. If 7/4 is too short for you from a betting perspective, BLUE LORD (12/1), also trained by Willie Mullins, could well spring a surprise if he lines up here. He was third behind Appreciate it and Ballyadam last time out and new tactics could see him relish the Cheltenham test.

With Willie Mullins pulling Energumene out of this race last week, Shishkin has been left as the 1/2 favourite for Nicky Henderson. It is a very short price but he warrants it with a winning run of six races stretching back to January 2020. Included in that sequence was a win in last year's Supreme where he beat Irish challenger Abacadabras. He has won effortlessly three times since with an average winning distance of 15 lengths. The expected good to soft ground will suit him too but I'm going to oppose him. I think he'll be in a proper race in the Arkle for the first time since he won by a head in that Supreme last year. I think ALLMANKIND (9/2) is the horse to give him that race. He was a tearaway last year over hurdles and either jumped out, went 100 miles per hour from the front and won by a street or he ran himself into the ground and got overturned. I tipped him for last year's Triumph Hurdle thinking he could do a similar job to Our Conor in that race way back in 2013. It didn't work and he finished third but he's turned into a mature jumper over fences, despite not being a big horse. He has won three times over the larger obstacles including a 17-length demolition of Sky Pirate in Warwick last month. He is still a little sticky at the odd fence so will give you the odd scare but he seems to have a bottomless engine. I think he can match Shishkin up the hill if he gets him into a dogfight. I think this guy could be a special horse for the Skeltons.

This is a great punter's race if you're looking for value. The favourite has only won once in the last ten runnings of this race and that was back in 2018 with Coo Star Sivola. This column tipped the winner in 2019 in the shape of Beware The Bear at 12/1 while The Conditional won at 15/2 last year. This race is for out and out stayers and one I'm willing to stick with despite his advancing years is VINTAGE CLOUDS (25/1). He has had wind surgery since finishing eighth in this race last year. He's run once since the surgery and he was honourable if not impressive during that pipe opener at Kelso where he finished third. He was second behind Beware The Bear in this race in 2019 and carries less weight than each of the last two years. He will be up against it with younger horses but he always gives his running and can certainly get involved if still in fighting fettle.

It could be a battle of the mares in the Unibet Champion Hurdle. Last year's impressive winner Epatante is back to defend her crown with Ireland's great white hope coming in the form of the unbeaten HONEYSUCKLE (3/1). Epatante lost some of her allure when she laboured to a defeat at the hands of the admirable Silver Streak at Kempton over Christmas. Silver Streak is a good yardstick and was 6th in last year's Champion Hurdle but is no superstar and had six lengths to spare over Nicky Henderson's super mare. Honeysuckle is the favourite here but is still decent value at 3/1. With an unbeaten record stretching back over 11 races, you have to stick with her. I would be wary of the enigmatic Goshen who could be as brilliant as he was in beating Song For Someone by 22 lengths last month, or he could throw all the toys out of the pram and get pulled up halfway round. If you want an each-way punt, Silver Streak is reliable and will give you a run for your money, no doubt.

Concertista is a warm favourite for this but I am very much against her. She won by 12 lengths in last year's novice mare's hurdle and hasn't done anything wrong this term. I think she's had the measure of Minella Melody in two races this year but I'm keen to see her up against ROKSANA (4/1) who I think will win this. I was there to see it when she won this race in 2019 but that came at the expense of Benie des Dieux who had fallen when bounding clear at the last. Many Irish punters cursed their luck that day after a Willie Mullins accumulator was undone but Roksana probably deserved a day in the sun. She has been running over further this season and was thought to be heading to the Stayer's Hurdle. She was third behind Paisley Park at and Thyme Hill in the Long Walk at Ascot last December, a serious piece of form. She also beat Magic of Light last time out and annihilated Next Destination, a very good horse from the Paul Nicholls yard, at Wetherby last October and I think she is a tougher horse now than she was when she won this race in 2019 and when she finished fourth in it last year. I don't think the race is as strong as it was last year when Honeysuckle beat Benie Des Dieux and that's why Roksana gets my vote to regain her crown. I also think Great White Shark (12/1), a second-string from Willie Mullins' yard, could run into a place, maybe even ahead of Concertista.

This is a very interesting race with the likes of Busselton from the Joseph O'Brien yard, Saint Sam for Willie Mullins and  Dermot Weld's Coltor all with a chance from an Irish perspective. However, I'm going for a UK horse via France in the shape of HOMME PUBLIC (14/1). To me, he represents excellent each-way value at the weights considering he went down by just a neck to current second favourite Houx Gris when they were both plying their trade in France. They carried the same weight that day but the selection will carry three pounds lower than that rival here. Homme Public has been very good in both his races since the switch to the UK to the Oliver Greenall stable. He was second at Catterick first time out for Oliver on heavy ground but was seen to better effect on soft (good to soft) ground when beating Gilbertina by six lengths at Market Rasen. Going at Cheltenham this week is similar after some unexpected rain at the weekend so at the prices, this fella is a great value bet. Let's hope he's there or thereabouts as they clear the last hurdle.

There is a lot to like about Next Destination here, a horse who was an exceptional novice hurdler for Willie Mullins before moving to the Paul Nicholls yard. He will stay and looks a top staying chasing prospect but he's gone a bit skinny in the market for me now with the redirection of long-time favourite for this, Royale Pagaille, to the Gold Cup. I'm going for familiar colours in this race with REMASTERED (8/1) trained by David Pipe. He was a fair hurdler but has a touch of class over fences and has recorded three wins from three runs over the larger obstacles, including a career-best to win the Reynoldstown at Ascot last month. He's won over three miles in the mud at Wetherby and so is a proven stayer. He will ensure this will be an absolute slog and I'm not sure others will stay as well as him up the hill. Native River ran in the same Brocade Racing colours in this race in 2016 and was only beaten by Minella Rocco. We all know what Native River went on to do in the Gold Cup in 2018 and who's to say this lad isn't good enough to emulate him on that front some day.

SELECTIONS AT A GLANCE:

Appreciate It, Honeysuckle and Roksana - ALL TO WIN - 28/1