Will Fitzgerald signs a one-year deal at Derry City 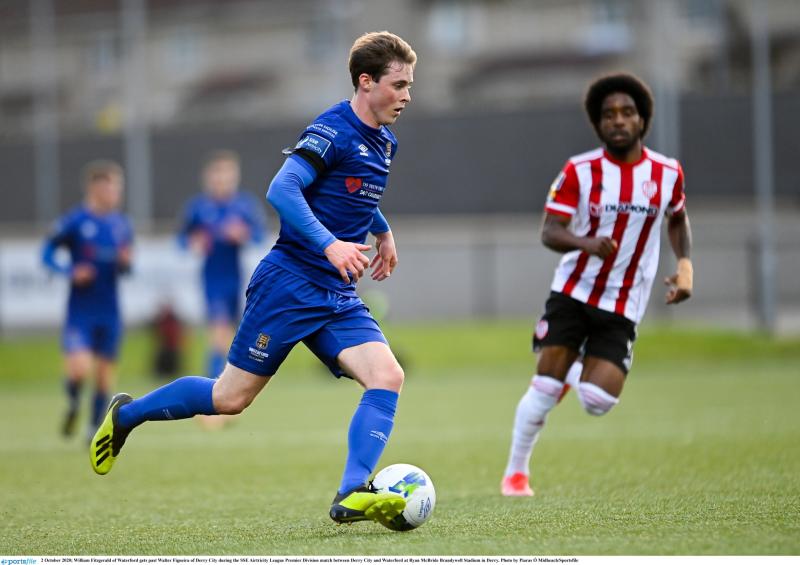 Will Fitzgerald in action at the Brandywell last season

Derry City have succeeded at the second attempt in bringing William Fitzgerald to the Brandywell, the talented winger signing a one-year deal at the club today.

The 21-year-old left Limerick in 2019 to sign for Waterford amid interest from City and St. Patrick’s Athletic, but less than 18 months later he has come up North to sign for Declan Devine.

The attacking midfielder was part of Stephen Kenny’s much-touted Ireland under-21 squad last year and has played his club football at Limerick and Waterford.

“I’m not the first Derry City manager to try to bring Will to the Brandywell so I’m thrilled that we’ve got our man,” Declan Devine said.

“He’s only 21 but he has already played more than 50 games in the League of Ireland which tells you something.”

“Will has been fantastic in training and has settled in very quickly.”

“He carries the ball out really well and is so composed with it at his feet. He will be a genuine goal threat for us.”

“Will is an extremely hard worker and has real intensity to his game.”

“He is a player that I have no doubt will really excite Derry City supporters and I’m looking forward to watching him drive us forward this season.”

It has been a busy day for Derry City who have also signed former Finn Harps winger Marc Walsh on a one-year deal. Goalkeeper Jack Lemoignan has also signed his first professional deal at the Brandywell, signing a two-year contract.