'No player should be subjected to this abuse' 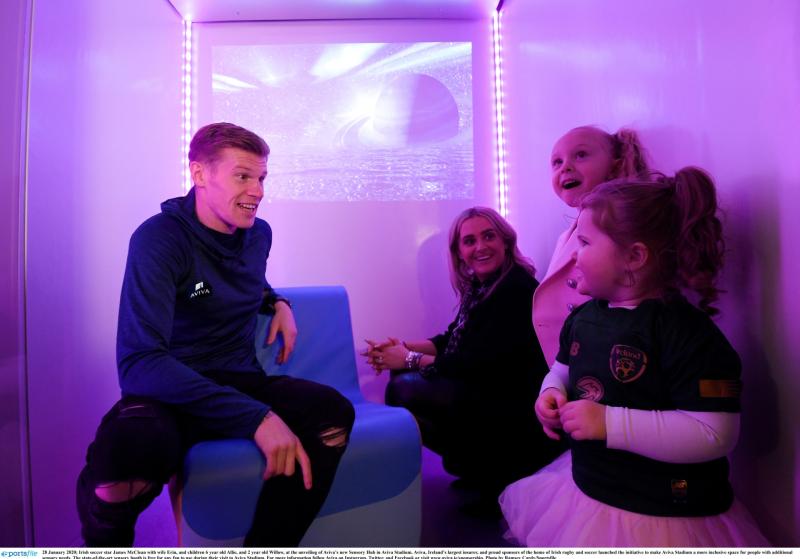 James McClean with wife Erin, and children Allie and Willow

A close friend of James McClean has insisted that the support received by the Derry man and his family this week is ‘long overdue’.

James and his wife Erin have been outspoken in recent days about the ongoing abuse the family have received, not just recently, but ever since moving to England in 2011. The abhorrent abuse includes threats not just to James, but his wife and both his children, and is incredibly a part of everyday life for the McClean family in England.

Rory Kelly, Institute goalkeeper and close friend of both James and Erin has welcomes the support, but believes it has been a long time coming.

“It’s been ongoing and it’s very unfortunate for James and Erin and the kids that it has followed them for the last nine or ten years,” he said.

“It’s taken nearly 10 years for people to stand up and support him. That’s the most difficult thing about it, that for so long it’s only ever been the people closest to James and the people back home in Derry who have recognized the abuse that he gets and the abuse that’s targeted at the family.

“Seeing that is very difficult and while it is pleasing to see people come out and support James now, that’s been led by James and of how vocal he is being about this now. It can’t keep going on and people are starting to recognize that now. He is 100% right because discrimination is discrimination whatever way you look at it.

“If you’re Irish that shouldn’t matter, and that’s fallen on deaf ears. People have chosen to turn a blind eye to it at times, even back home, that’s why it’s good to see now a bit of recognition and feel the support going around now so it’s not just his closest network doing it for him.”

Rory has seen the abuse that James receives first hand, whilst spending time with the Republic of Ireland international during his days at Sunderland.

“It’s not just at matches, it’s when you’re out for lunch or you would be walking through a shop and you would hear people calling him this or calling him that,” he explained.

“It would be to provoke a reaction or get his attention. James, in fairness, was always very strong in terms of not reacting and not letting himself down and not getting caught up in anything. It can be water off a duck’s back at time but it does sit with you especially the long it has gone on.

“James is a dad and has a young family who are becoming increasingly aware; his two oldest are not babies anymore and I think they are starting to pick up on things. No player should be subject to that but James has been subject to that from the very early days of his career.”

There has been an outpouring of support for James and his family from all corners this week – from his club Stoke City, the PFA, from former and current team mates and from the FAI. Yet the threats and abuse continue to come, and Kelly believes there will be no quick fix to this problem.

“Could anyone imagine if the abuse that James gets on a weekly basis was getting directed at a black footballer,” he asked?

“You would think of the uproar and the attention that would get, whereas James is exposed to that every single week. There’s never an eyelid batted and that’s the crazy thing about it, that it’s taken 10 years for people to say, ‘You know what? We’re going to back him here’. That’s his fellow professionals and media outlets and people at the club and even the FAI. It’s good to see that support coming, but it’s long overdue.”

Social media companies like Twitter are coming under more pressure to tackle keyboard warriors, making people more accountable for their actions. That is just one step that can be taken to solve the problem according to Rory.

“You have to be optimistic, but it’s down to people’s choices and all it takes is an individual to say something,” he added.

“They might get a slap on the wrist but ultimately for someone to threaten a family and say they will burn their house down is madness. It is hard to control and while it is brilliant that he is getting the support, there will never be a one-off fix for this problem. People who do this are inherently like that, and they will choose to abuse who they abuse.

“You would hope now that with the governing bodies, and clubs and players coming out to support James and recognise that discrimination is wrong on every front, it might at least start a conversation.  Just because it is an Irish player, it is still wrong. This is probably the starting point and fundamentally that is where it has to start.”