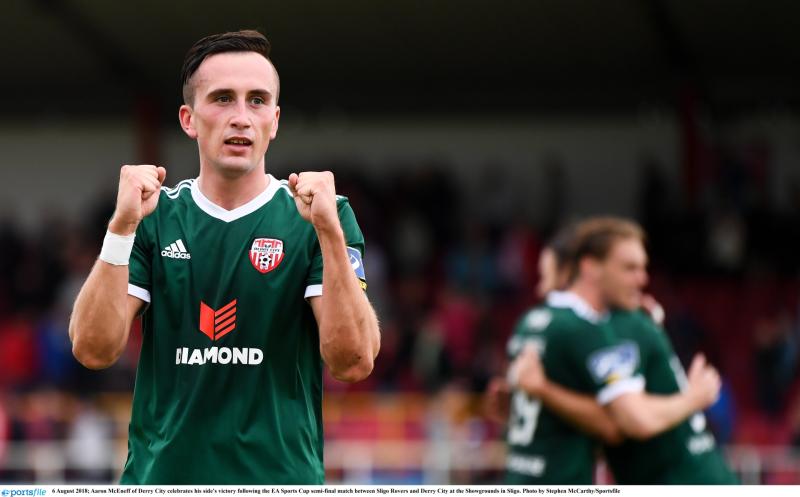 Aaron McEneff has proved all his doubters, including Tottenham Hotspur wrong, by proving he belongs on a bigger stage.
The former Derry City midfielder left Shamrock Rovers last week to sign for Scottish Championship leaders Hearts, signing a two-and-a-half-year deal after the teams agreed a transfer fee believed to be in the region of £175,000.
Peter Hutton, who brought McEneff to Derry City in 2015 after his release from Tottenham, believes that the midfielder was always destined to return across the water such was his drive to succeed.
“I’m delighted for him because he’s worked hard,” he said.
“Even when he came back from Tottenham the first time, he was very keen to impress upon that his goal was still to go back across again. We agreed an 18-month contract at the time because he was still keen to get back across the water and he was young enough and keen enough to get back across.
“He has worked extremely hard on his game and you can see that over the last couple of seasons. He has worked really hard, particularly more the defensive side of his game and technically he is top drawer, and you could see that even in the first couple of sessions when he came into the team.
“He’s a really good lad from a good family too so I’m delighted for him and I hope it works out for him.”
McEneff was a star player at Derry City in his three and a half seasons at the club, but since moving to Shamrock Rovers at the end of 2018, he has really come into his own, and was one of the key components in Shamrock Rovers’ first league title win since 2011. Hutton believes that decision to move to Dublin was proven correct by the 25-year-old.
“To be fair to him, it was a very tough decision to make,” he acknowledged.
“I know that having done something similar myself; it’s a very tough decision to leave Derry and go to one of your rivals. It wouldn’t have been an easy decision for him, but again, it just shows the character of the young man.
“He knew it wasn’t going to be popular and he was going to get grief as was his family members, but he knew it was the right thing for him and his career at the time. He wanted to go somewhere where he was going to be challenging and winning things and putting himself in the spotlight in terms of getting across the water, and it has worked out for him. He’s been justified because he has got that move which he fully deserves.”
Hearts are currently 12 points clear at the top of the Scottish Championship and a return to the Premier League looks likely, meaning that McEneff could well be playing on the biggest stage in Scotland within a matter of months. Hutton has no doubt that should the opportunity present itself, McEneff will not let it pass by.
“That gives Aaron a better stage again to go and play against the top players of the Premier League, Celtic and Rangers and that,” he stated. “It just gives him a different platform to showcase again what he can do. It is just reward for all the hard decisions he’s made.
“There are a lot of players who have gone the other way after coming home from England, and that desire and hunger is just not there anymore, but Aaron had that steeliness about him and that hunger and desire to go and prove Spurs wrong.
“It’s a dream come true for Aaron.”