Brandywell club turn down an offer for the midfielder 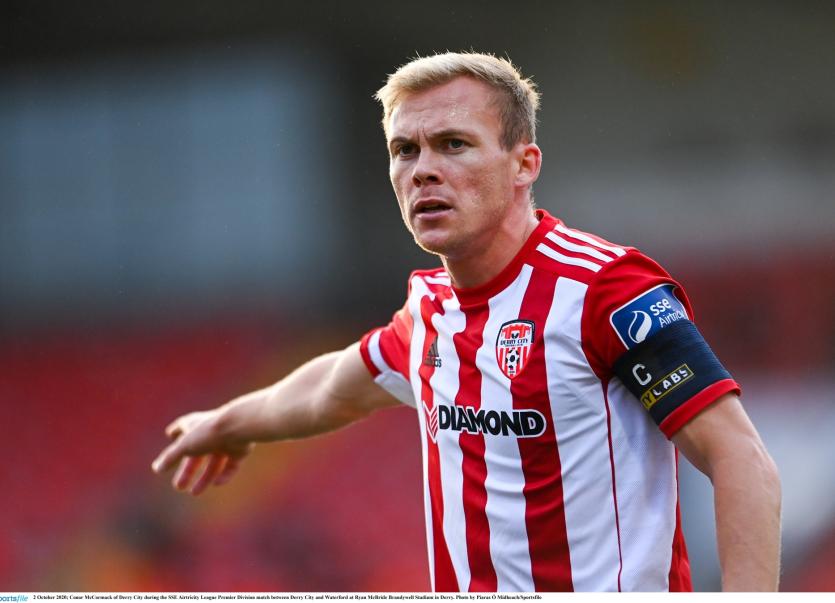 Derry City haven’t given up on keeping Conor McCormack at the club this season, having turned down a bid from Galway United at the weekend.

The midfielder has informed the club of his desire to move away from the Brandywell despite having a year left on his contract, and that has alerted several clubs down south.

So far, St. Patrick’s Athletic, Shelbourne and Galway United have all shown interest in signing the 30-year-old, but only one, Galway, have actually submitted a bid.

That bid was dismissed by the club at the weekend however, with the offer not meeting the valuation of the experienced midfielder, and the club also not willing to give up on McCormack staying at the Brandywell for another year.

It was a busy week at Derry City last week with Darren Cole, James Akintunde and Cameron McJannett all committing their immediate futures to the club.

Youngster Ronan Boyce also signed his first professional contract, while on Wednesday past, David Parkhouse returned to the club after a year away in England.

With the squad now taking shape, losing McCormack would be a blow with pre-season training just a few weeks ago, and speaking at the weekend, club Chief Executive Sean Barret insists there is still hope that the player would stay.

“We want him to stay,” he insisted.

The decision to give David Parkhouse a three-year deal was hugely positive news for the clubs supporters, who have watched players come and go with great frequency over recent years.

So far this close season, City have also given two-year deals to Ciaran Coll and Danny Lafferty, while Boyce’s first professional deal was also a two-year contract.

Despite the high volume of players coming and going at the club in recent years, Barrett insisted that the club’s policy to tie down local players for the long-term has not changed.

“It’s about showing a bit of commitment to the player and vice versa,” he explained.

“All our young players will always be signed to two or three-year deals, every local player always is.

“Patrick Ferry has signed a two-year deal and there’s a couple of other young fellas we would hope to do the same with now. In the two years some of them come on better than others, then after that we extend it as long as they want or we want.

“You’re not going to sign someone from across the water on a two or three-year deal because you don’t know if they are going to settle or not. Boys coming from England and Scotland don’t want more than a season anyway.”

Parkhouse has made no secret of his desire to return to England in the future and should that scenario arise, the club is at least protected with a three-year deal which could see them getting a transfer fee should the player leave. It’s a deal that works for both parties.

“Absolutely, we’ve done that over the years,” Barrett continued.

"We want them to do well, it’s great for young fellas from our town.

"I’ve been so proud over the years to see young fellas that played for Derry City either pulling on a jersey internationally or for a club from across the water. I think it’s fantastic.

“We haven’t dramatically changed because we’ve always done that. Some players come in and they only want a year or two years but it’s really between both parties. We’ve done this consistently for years.”