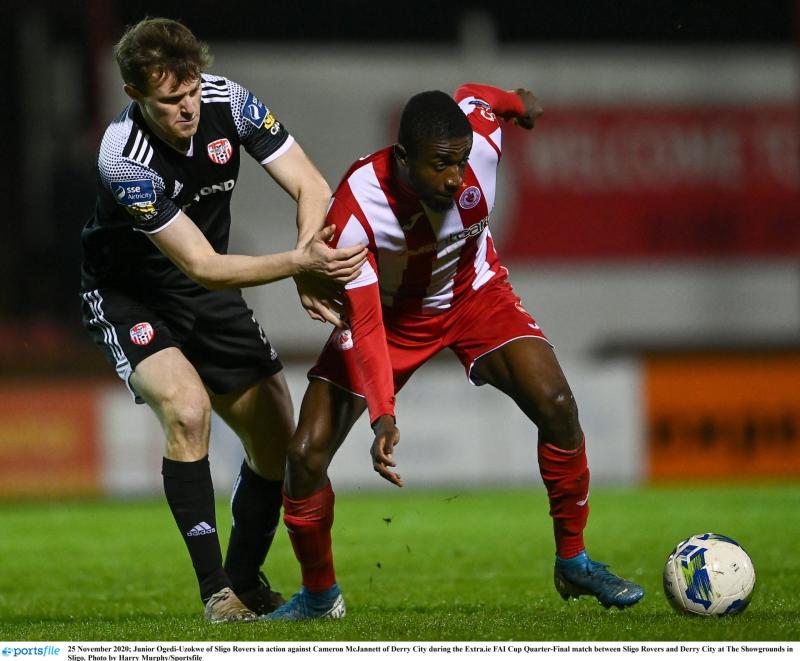 Cameron McJannett will return to the Brandywell in 2021

Cameron McJannett believes that Derry City can right the wrongs of 2020 this year and show that they are capable of competing with the likes of Shamrock Rovers and Dundalk.
The 22-year-old has signed on for his first full season at the Brandywell and is determined that this year is better than an entirely 'frustrating' 2020 season both on and off the pitch.
McJannett joined City in the summer in the middle of the pandemic and was arguably the standout performer as the team stuttered towards a poor conclusion to the season.
Yet despite the lockdowns, and the Covid-19 outbreaks at the club, McJannett did not take long over his decision to return this year.
"It wasn't a hard decision but with everything going on I didn't want to jump into anything," he said.
"After being home for a couple of weeks it wasn't a hard decision so it was easy to sign the paper. It's nice to hear Declan has faith in me and hopefully the results will come next season as we did well defending during the last part of the season."
The opportunity to play first team football was key for McJannett, who played 11 times for Derry last year, ousting Ally Gilchrist as Eoin Toal's permanent partner in the heart of the City defence.
"When I arrived in the summer it was my first time out of England. It was nice to have something different and it was an adventure, and it was the opportunity to play football again. I was grateful to play every game and do alright but hopefully the results will come this season because we didn't do too well last season. Eoin makes it easier for me. Everyone sees how good he is so it does fill me with confidence every time we walked out last season."

Morale
Last season, things were clearly difficult on and off the pitch, but McJannett is expecting a different situation when he returns this time around, and is hopeful that the team morale is much improved.
"I was only there for the last bit of the season, but I was told that in other seasons it was very different," he continued. "This season will be different again, but in a better way, in a positive way. That probably made me play better and take me on. 2020 made me realise it can all be taken away from you just like that.
"It was a frustrating year. I was alright because I was just away from home but some of the boys have kids which they went weeks without seeing. We just had to sit in our rooms for weeks on end and not play football, and watch all the teams win around us and be expected to play two games in three days without any training. That was the most frustrating thing.
The season is expected to begin towards the end of March, all being well, and after a stop-start year and an extended close season, McJannett is just looking forward to getting back on the pitch as soon as possible.
"I'm itching to get back because lockdown seems to have followed me wherever I have gone," he stated. "It's lockdown at home at the minute and I'll have to isolate I think when I get back to Derry, so the sooner the better probably. I just want to play every minute and keep as many clean sheets as possible and show that we can compete with the likes of Shamrock Rovers and Dundalk."
Declan Devine was keen to bring McJannett back to the Brandywell and described him as the 'shining light' in the team last season.
"Cameron was brilliant for us last year and I’m delighted to have managed to get him back,” Devine said.
“He has been a shining light in our team in his time here so far and I thought his partnership with Eoin Toal was rock solid for two such young players.”
“He’s a fantastic lad to work with and has a huge future ahead of him. I know Derry supporters really took to him when he was here and I believe this is a big signing for us.”
“We’re building a really good defensive unit as we prepare for pre-season and I’m happy that players like Cameron want to be a part of that.”