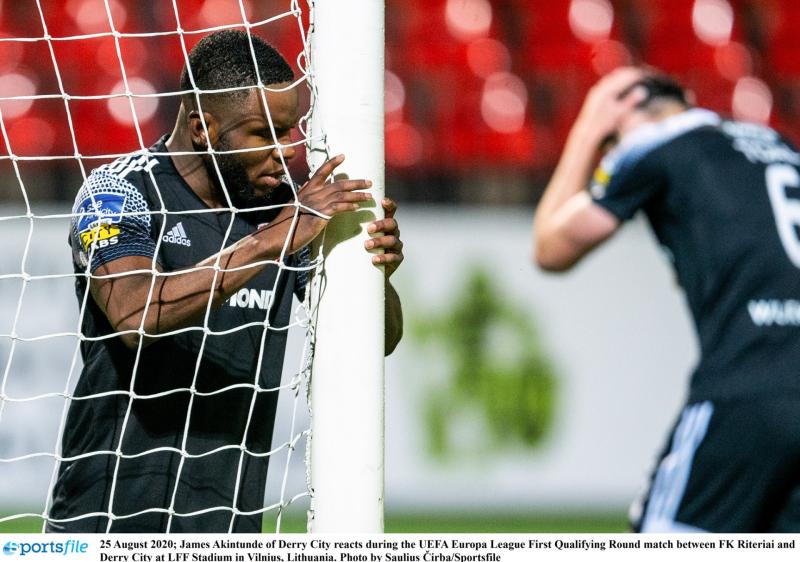 James Akintunde is looking forward to playing with Derry City

James Akintunde is excited at the prospect of teaming up with David Parkhouse this season, after speaking with Junior Ogedi-Uzokwe about his new strike partner.
Uzokwe, whose own future remains uncertain, formed a successful partnership with Parkhouse in the 2019 season, the pair scoring 35 goals between them in just one campaign.
Parkhouse has now returned to the Brandywell after a year away, and will join Akintunde in a new-look City attack. Akintunde, City's joint-top scorer last season, is excited after hearing good things.
"I enjoy playing with a partner and I've heard good things about him, so I'll be excited if we get to play together, to form a partnership," he said.
"Junior spoke to me about him and spoke highly about him and told me he's a really good player. He gets goals, he's physical and he could play off him so yeah, he speaks highly of him.
It's good if strikers are able to play off each other so a partnership is really important, and maybe that's something that we kind of missed last season."
Akintunde signed a new one-year deal with the Candystripes this year, and insisted that with a full pre-season and full fitness, he will be much improved on last season, and he is certain that there will be a lot more goals.
"I actually enjoyed the time I had there and I know with a full season that I'm capable of even doing better," he insisted.
"I like the staff, I like the players and I like the set-up so I'm glad to be back. My main focus now is on getting my head down and having a good season. Coming in halfway through the season was tough because I always felt that I was trying to catch up with fitness. I scored a few goals but I could have scored a few more. It's down to fitness as well because a lot of the time I got injured, but I'm hoping that this time around, with a pre-season under my belt, that I'll be able to get through a lot more games.
"I know myself that if I had full fitness that I could have got more goals. I missed maybe a couple of chances where I thought after the game that 'I should have scored that'. That happens in football, but I just think that with full fitness that I'll definitely, definitely get more goals."

Changes
There have been a number of changes at the club since the end of last season, with some short-term players, who arrived at the same time as Akintunde, not returning. The likes of Jake Dunwoody for example, stated that it had been a mistake to join Derry City, but for Akintunde, there were no such issues.
"To be fair I actually wanted to come back," he stated. "There were no problems at all for me. The staff that have left and the players that have left, I was on good terms with them and they are all good people and I wish them the best. I haven't got to experience the city properly because of lockdown but the time that I was there everyone was nice and friendly so I enjoyed it."
As things stand, pre-season will get underway in February and Akintunde is looking forward to returning to the city, and getting back on the pitch to leave last year's failures in the past.
"Last year was a disappointment, especially with the Europa, but this season I know all the boys want to get top four," he concluded. "That's the goal, that's the plan, and to do well in the cups as well. I'm just looking forward to every game and treating every game the same. I just want to stay fit and give my all, 100%."