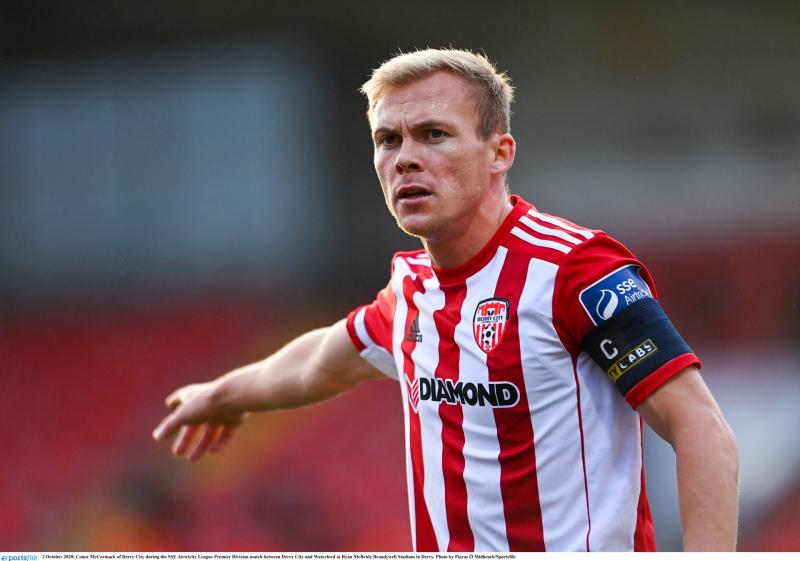 Conor McCormack could be set to leave Derry City in the coming weeks.

With City boss Declan Devine hard at work behind the scenes as he attempts to strength the squad for the coming season, he may well have to do without his current captain, who is considering leaving the club despite having one year left on his contract.

Galway United are believed to be one of the clubs interested in McCormack, with boss John Caulfield eager to build a squad capable of challenging for promotion from the First Division this year.

Caulfield brought McCormack to Cork City back in 2016 and the combative midfielder was made captain at Turners Cross. He played a key part in Cork winning the league and FAI Cup double just a year later, scoring a penalty in the shoot-out victory over Dundalk at the Aviva Stadium,

Just a few months after Caulfield left the club in 2019, McCormack also left, returning to the Brandywell for a second spell at the club.

McCormack was originally brought to Derry City by Peter Hutton in mid-2015 and spent 18 months, making 49 appearances and scoring one goal before moving to Turners Cross.

He returned to the Brandywell at the end of 2019, and was made captain by Declan Devine, seen as a direct replacement for Greg Sloggett who had joined Dundalk after just one season in red and white. The lure of European football was a big factor in McCormack returning, but it ultimately proved to be a disappointing season with City knocked out of the Europa League at the first time of asking by Lithuanian side FK Riteriai.

Domestically, City also struggled, as they travelled to Cork City on the final day of the season needing a point to ensure their Premier Division status. The point from that 1-1 draw saw the Candystripes finish in seventh place.

In a season which Covid-19 affected football across the world, City were also badly hit, with two outbreaks at the Brandywell, bringing a disruptive inconsistency to games in the final two months of the season. Despite the upheaval, McCormack was an ever-present in the City side, featuring in 19 of 21 games in all competitions, again scoring one goal.

McCormack’s last act as City captain could well have been his missed penalty in the FAI Cup quarterfinal loss at Sligo Rovers, after which he admitted that it had been a difficult year for everyone involved.

“It has been horrible,” he said. “There’s no way of dressing it up. It has been very difficult for players. “It’s been a very difficult season for us, especially there the last few weeks. We were locked up for two weeks then played two games over 48 hours without having been able to prepare properly.

“Then we went into another two weeks lockdown and didn’t have time to prepare properly for Sligo which was a really winnable game.

“We didn’t get off to the best start. We got a bit of momentum and then there was the shutdown. We didn’t start well after the break and found ourselves in a difficult situation.

“We pulled it out of the bag with another couple of wins and were shut down again, so it was very hard to build momentum or team morale. There were no team bonding sessions as we were all separated away from the training area.”