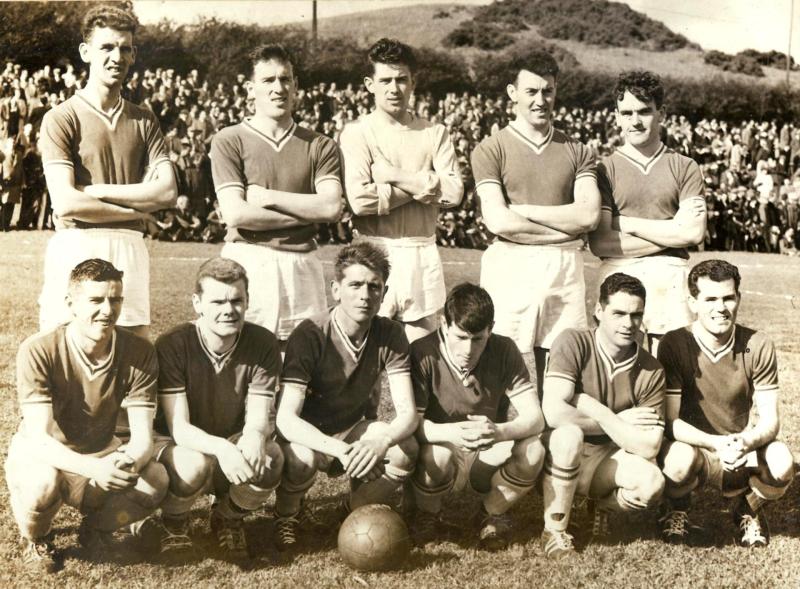 The winning Trojans team from 1961.

Football fans of a certain vintage may well remember the Moville Cup, and the Trojans team who became the first team to win a £1000 prize in a local tournament back in 1961.
The competition, which had a long and prestigious history, was first played for in 1935 when Mr Jack Kennedy of Belfast, who had Moville parents, presented a valuable cup to the Foreign Mission Society in the town.
The society ran the competition for several years before they handed over to the local football committee who themselves sponsored it till 1958.  Then in 1958 as summer football became more and more popular, a committee was created to make it a major attraction in Moville.  With prize money of £100 Derry Celtic beat Clonmany in the final.
The following year the prize money increased to £200 and the cup was donated by Mr. G. Bradley, a native of the town but now living in New York.
Trojans entered the competition in 1961 and went all the way to the final. They defeated Boville 3-0 in the last eight thanks to two goals from Colm Norris and one from Connell.
In the three other quarter-finals Albert Celtic (1960 winners) beat the Freebooters of Dublin (1959 winners) 2 v 0. Inishowen United beat Crusaders (Castledawson) 2 v 1 and finally Derry Rangers beat Kildrum Tigers 3 v 1.

Semi-Final
(Sunday August 27th)
Derry Rangers 1 v 2 Trojans
Trojans were the underdogs for the game but aided by the wind they monopolised the first half although Rangers looked dangerous in their occasional raids.  Ten minutes after the first whistle Billy Nelis opened the scoring with a neat lob from just outside the penalty-area (0 v 1).  Although Trojans kept the pressure on it was Rangers who came closest, a fierce shot from Chris Wade on the left wing slipped through the hands of keeper Sharkey, but he recovered, diving at the feet on onrushing Mc Cann and T. Cassidy.
Holding a single goal lead many in the crowd felt the narrow lead was not sufficient enough.
Shortly after the resumption the lead was doubled, Frankie Mc Geehan scored the all important second.  Eddie Crossan received the ball on the half-way line, made ground before sending a long ball to Mc Geehan who ran on and beat the Rangers keeper Jim Devlin (0 v 2).
The goal was a nasty jolt for Rangers and knocked them out of their stride until the final fifteen minutes when Paddy Cassidy scored for them (1 v 2).  From then onwards Rangers threw everything into it trying to advert defeat but Trojans defenders held on.
Outstanding for Trojans were Sharkey in goal, the half-back line of Ferry, Mc Laughlin and Mc Guinness, while Crossan, Nelis and Mc Geehan were the pick of their forwards.
Shining for the Rangers were their keeper Devlin, Raymond Cassidy, Danny Breslin, T. Cassidy and Joe Mc Keever.  The 1960 Cup holders Albert Celtic returned to the final following their narrow one goal win over Inishowen United.

1961 Moville Cup Final
(Sunday Sept 17th)
Albert Celtic (Belfast) 2 v 3 Trojans
The two teams were led onto the pitch by the St. Columb’s TA Brass and Reed Band with referee Mr D. Cassidy with his assistants Jimmy Kelly and Mick Travers behind.  The parade around the pitch was well received by all in a large crowd at the Bay Road.
Trojans got the game off to a dream start with two goals within the opening twelve minutes.
The first goal arrived after three minutes when Mc Geehan’s shot hit an upright and Eddie Crossan slammed the ball home (1 v 0).
Crossan then clipped two defenders and the Albert keeper could only parry his effort leaving Mc Geehan the easy task pushing the ball over the line (2 v 0).
With such a good beginning more goals were thought to come along however Albert had other ideas.
The Belfast side came more into the game and from a forty yard free-kick, they had reduced the lead (2 v 1).
Into the second half and although Robinson looked suspiciously offside when he slid the ball across for Mc Geehen to crack it past Noade between the sticks (3 v 1), the goal stood.  Albert bagged a second goal with fifteen minutes left to play with a header from Mc Clean (3 v 2) but were unable to find an elusive third.
The Kennedy Cup was presented by Mr. Goras Bradley, donor of the trophy who had returned from the USA especially for the occasion.
Teams
ALBERT CELTIC: Noade, Mc Bride, Brennan, Morgan, Molloy, Herron, Mc Cabe, McClean, Morgan, Hawkins and Dawson.