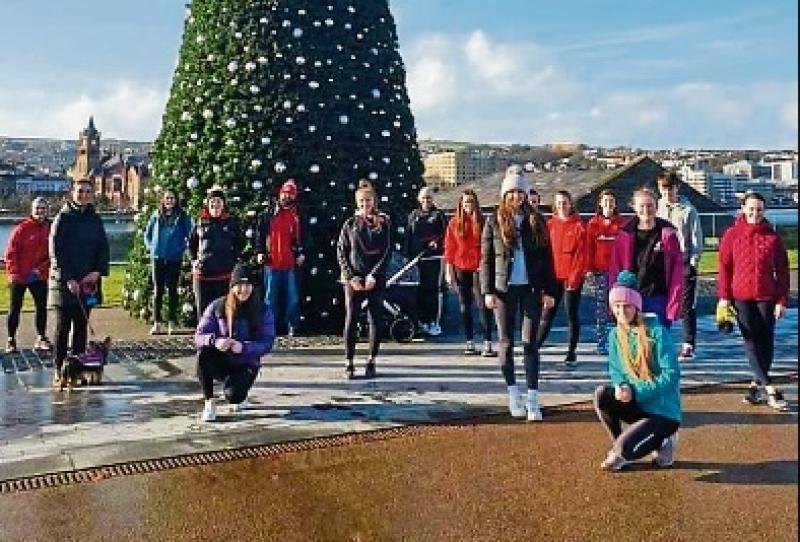 Priorians have succeeded in walking the distance to Tokyo.

And they've done it!

Local hockey club Priorians have made the most of lockdown to record an incredible feat of distance and endurance over the past month, smashing their 'Road to Tokyo' challenge by over 1500 kilometres.
The ‘Road to Tokyo’ fundraiser was thought up by club member Crystal Cunningham, in response to the Irish national hockey team, including past member Megan Fraser, being unable to get to Tokyo Olympics this past summer.
The challenge was to complete the distance involved, a daunting 5,1871 miles to not only raise funds for the local club, but to also maintain the team spirit and camarderie at a time when that feeling of community and togetherness was needed, perhaps kroe than ever before.
After six weeks of walking, running and cycling, the club have announced that not only have they completed the distance, but they have gone way beyond it, completing a total of 11,029 kilometres, which translates to just shy of 7,000 miles all in.
“It was brilliant,” club member Emma Allen says.
“We had over 90 people taking part, right down from younger people in our junior section up to parents and members of our teams as well so it was brilliant and we went well over our target.
“We started off with just a few people who were club members, and then word got out and we gathered momentum. In week 3 and 4 we were over 2,000 kilometres a week because more people got involved. One positive aspect of lockdown is that it helped us because people were more out and about.
“Our young members in Foyle College came up with a competition between themselves and the teacher got involved to see who could do the most each week between them, so it became a competition within a competition as well which was good.”

Beyond their target
Those involved completed in miles in some of the worst weather conditions of the year in the past few weeks, and it even got to a stage when they didn't want to stop, despite reaching their target.
“We're hockey players so we're pretty used to being out in the cold and the wind and the rain in short skirts and t-shirts so it didn't bother any of us at all,” Emma laughed.
“As it was such good fun, we just decided that we would just keep going. We completed it in week 5 and had thought of maybe stopping it but because the feedback was that everyone was enjoying it and it was actually making people go out and about, we didn't make such a fuss of it completing it in week 5. We kept it going into week 6  to see how far we could make it back from Tokyo. “Everyone was well up for the idea to continue it on into week 6 and I think people are still entered into Strava at the minute and are happy enough to keep going.”
As well as completing a huge undertaking, the participants were able to raise £1700 for the the club itself, important funds which will help the club significantly through the coming months. More importantly than the money however has been the bonding and the strengthening of the team spirit at a time when there is no hockey being played.
“People have been so generous, even just giving donations to the club for the effort and we are really pleased with that amount of money,” Emma insists.
“At the minute we're hoping we will be able to get back onto the hockey pitch at some stage. If lockdown lifts we can maybe start training. There is no sign of matches just yet but if we can get back out training that could keep us going.
“We've had to completely stop. We would be in Senior One which would the second highest in Ulster so we aren't classified as elite, but there is no hockey being played at all in Ulster and no training.
“We only got one match played at the start of lockdown at the end of September, so we are hoping the matches will start in January and hopefully we can get back to training some time in the middle of this month.
“We have nothing else planned at the minute after finishing the Tokyo challenge, but you just never know, watch this space!”