Family of former Derry boxer reaching out to his home town 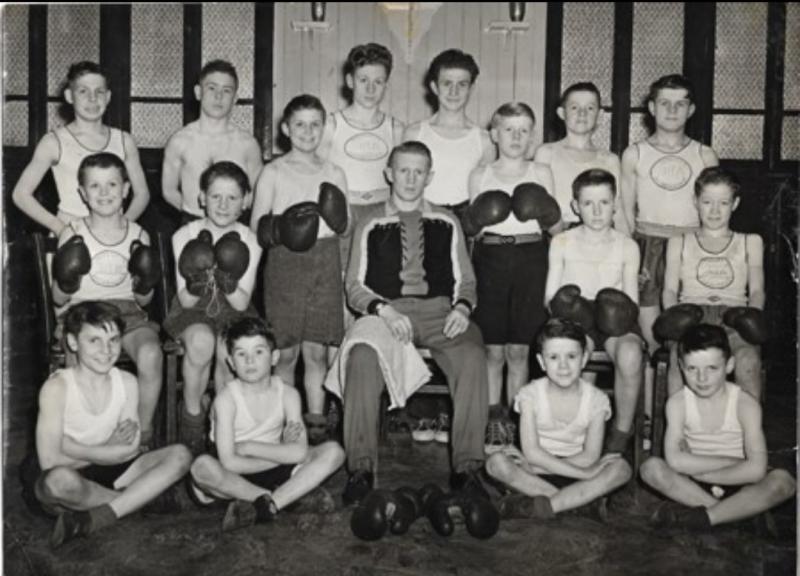 The family of former Derry boxer Jimmy 'Ginger' Loughrey have reached out to his home town after the former professional flyweight's recent death.
Loughrey, a member of City of Derry Amateur Boxing Club back in the 1950s, was well known in local circles in both boxing and football, before he moved to England in the 1960s and settled down for the rest of his days in Nottingham.
Loughrey's love of sport and community followed him all the way and he made his mark in his new home, setting up Priory Celtic Football Club and Eastwood ABC, spending an incredible 40 years of his life encouraging the next generaltions of sporting stars.
Jimmy died just a few days shy of his 89th birthday and he was laid to rest on Friday past.

Early days
In his younger days, Jimmy Loughrey once stood toe to toe with Olympic champion Terry Spinks. The bout was held in Haringey Arena before Spinks went on to claim Olympic gold and later the British featherweight title.
Although he lost that particular bout to Spinks, he never lost his love of the noble sport over the next decades of his life and his contribution to sport was recognised by Nottingham City Council after 40 years of being involved with the youth of the community, presented with a Golden Jubilee Award by Broxtoe Borough Council.
Described as one of  Nottingham's 'most colourful and dedicated of men' whose love of football and boxing had been passed on to eager rising stars.
“I am sure there are far more deserving causes, but I am pleased to have been given an opportunity to pass on what knowledge I have to enthusiastic youngsters and to promote the good of young people who have a lot to offer.”
At the age of 14, Jimmy was involved with the St. Eugene's Boys' Club where he helped to run football and boxing teams.
He then attached himself to the City of Derry ABC and such was his potential that in 1952 he was persuaded to turn professional.
In a distinguished boxing career as a flyweight, he had 42 contests, 30 of which he won. He drew four and lost eight, before retiring from the ring in 1957.
He then moved to Nottingham in 1965 where he worked as a bookie's runner, a builder, and a delivery driver before qualifying as a youth leader with the National Association of Boys Club.
From there he was invited to help run the Hilltop Catholic Church Youth Club and afterwards he went to Eastwood Youth Centre as an assistant leader.
It was at the Eastwood Youth Centre where Jimmy encouraged an interest in boxing and as a result Eastwood Amateur Boxing Club was formed in the late 1970s.

Reaching out
Since his death, his grandson Wayne Barton has uncovered more of Jimmy's life and as he himself discovers more about his grandad, he is eager to share and reach out to anyone who knew Jimmy from his days back in Derry.
“Since he passed away, I've retrieved all his sporting memories,” Wayne told the Derry News. “He was born in Derry and lived there before he came to Nottingham where he married by nan and they were together for 40 odd years.
“The first thing I found was the report from the fight against Terry Spinks. Terry and my grandad both fought each other in Spinks' first professional fight and through that I've been finding other bits as well.
“My grandad was a featherweight pro and as well as boxing he was heavily involved in football, both through a Catholic school in Derry.
“He also started a football club over here, Priory Celtic FC, which has now got 43 teams from U7s upwards. He opened his own boxing gym as well and trained quite a few boxers. He didn't really talk much. He enjoyed doing what he done, football ad training, but he wasn't one for bragging or talking about his life.”
Wayne speaks with an enthusiasm that obviously runs in the family about his grandad's love of sport and of giving back to his community.
“There's loads of information and I've only just started finding them,” he explained.
“I don't know a lot, I'm still learning. It's shocking what you learn from something like this.
“The last we heard he had a niece. His other family members have passed away but I don't know if there's any more of his family over there so I thought if this was in the paper, and anyone did know, maybe they could pass it on or get in touch.
“He used to donate his time to train pupils at the schools he worked for football and boxing, so anyone who was there in that time frame – I think he was in his 20s – they might remember him and anyone who knows him can maybe pay their respects to him.”

Recognition
Jimmy's selfless work unsurprisingly received citywide recognition and as he goes through the treasure of his grandad's long and productive life, Wayne is moved by the number of lives that Jimmy Loughrey touched in many ways.
“He eventually started getting Alzheimers so he had to stop work and stop training but the Nottingham City Council gave him an award for all the outstanding work that he did over on this side,” he continued.
“As well as these newspaper clippings I have loads of old black and white photos here from boxing from Derry. There are also a few bits I'm sending back to the Omagh Memorial Fund because he did a charity boxing match at the time. I have a video of the medals being passed around and I have an address so I'm sending that back to Omagh where that belongs.”
Wayne is hoping that by reaching out, he can learn even more about the man who achieved so kuch, on both sides of the water.
“It would be nice to get in touch with other people who might have known him for periods as well so I can pass stuff on and put  it where it belongs instead of just chucking it,” he said.
“It's not only my grandad's history, it's everybody else's history – there are hundreds of people who he has met.
“All the photos that I have got of him, he was never one to be stood in front. He is either in the middle or toewards the back where you can still see him or at the sides. He was never up front apart from a couple of boxing ones. I have one of him from 1957 of him and Terry Spinks
“It's not a loss, he has done a lot and he has gained. This is to just let the people in Ireland know, where he is from, where he started his boxing, because there will be people out there who know him.”