From Magic Mallon to Terrific Toal - Pick your Player, Goal and Moment of the Season 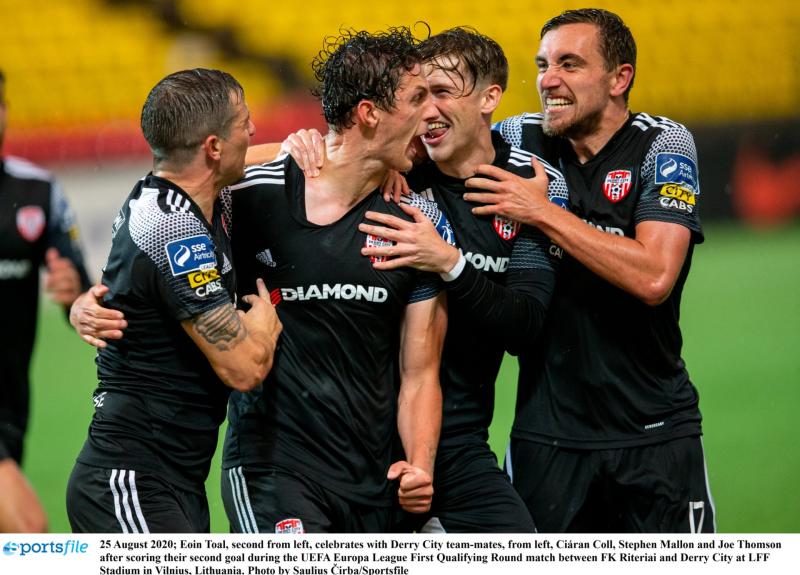 The 2020 season will forever be looked back on as an anomaly, a year when what happened on the pitch paled in comparison to events off the pitch as the coronavirus pandemic took hold worldwide.
From a five-month break in the middle of the season, to two Covid-19 induced breaks towards the end of it, it was a season like no other, and one which few, if any, will look back on with any great deal of fondness.
Derry City came into this year so optimistic after a season of renewal under Declan Devine in 2019.
The Candystripes had finished in fourth place, qualified for Europe and just lost out to Dundalk in the EA Sports Cup Final.
Despite the hurt of that loss, the overall feeling was that of progress, and with a number of new signings in, it was expected that the club would keep heading in the right direction in 2020.
What followed was anything but as disappointing results early on put Derry on the back foot before the pandemic called a halt to everything for the longest time.
When the season finally resumed, it was a different world and a different game, with fans having to watch on from home instead of the stands and games were played in surreal circumstances in empty stadiums across the world.
Derry City still had fixtures to fulfil and while it was a disappointing season in many ways, there were still some positive aspects to take from the wreckage of the 2020 campaign.

PLAYER OF THE SEASON
Eoin Toal
Eoin Toal has come on in leaps and bounds over the last two years and as a result Derry City could struggle to keep him at the club in the near future.
The 21-year old has really grown in maturity and stature and he was clearly the stand out performer this season, not only in defence, but the whole squad.
No player stood as tall as Toal, who has grown in confidence and belief with every passing game.
At times, City would be lost without Toal, his ability to bring the ball out of defence key when City were struggling to find their way forward.
He is also a threat at the other end of the pitch, and scored a brilliant headed equaliser against FK Riteriai in the Europa League.
Other players were in contention, such as Walter Figueira and Stephen Mallon, but in reality, no one came as close to the impact that Toal had on the team this season.

GOAL OF THE SEASON
Stephen Mallon vs. Bohemians
Derry City’s second goal of the season proved to be the best of the lot, in a season when quality in the final third was severely lacking at the Brandywell.
After a late defeat to Dundalk in the opening game, and a late equaliser against Finn Harps, City were under pressure to get their first win.
That was easier said than done against a Bohemians side who were going places under Keith Long.
The game at the Brandywell on February 28 was as hard-fought as expected, and neither team were able to make the breakthrough until Stephen Mallon produced a moment of magic to set up the first win of the campaign.
Receiving the ball on the left wing, Mallon cut inside and breezed past three players on his way into the Bohemians penalty area before blasting the ball past the goalkeeper and into the top corner for his first Derry City goal.
It was an unbelievable strike and untouchable for the rest of the season.
That game proved to be the last one attended by supporters in 2020 but at least they had a great memory to take home from it.

MOST IMPROVED PLAYER
Jack Malone
Still only 20, Jack Malone has so much more to offer Derry City in the coming years, but this past season he took important steps forward.
Now a permanent part of the first team squad, Malone was always in the mix, making 11 league starts and 7 substitute appearances, meaning that he was one of the very few to make an appearance in every single league game.
Malone also showed a great work ethic and proved his worth as a team player by playing in a number of different positions, from left back to right wing.
He may not have found the net this year but he chipped in with three assists. Malone can only get better going forward.

BEST NEW SIGNING
CAMERON MCJANNETT
Cameron McJannett only joined Derry City towards the end of August, but what an impact he has made in so short a time.
Making his debut in the FAI Cup game at Drogheda United, McJannett has been an ever present since, forming a strong partnerhsip with Eoin Toal in the heart of the Derry defence. He has made only 10 appearances overall, but he has been brilliant, going about his job quietly, efficiently and without any fuss.
Before McJannett arrived, City were having serious problems at the back, but since then there has been a marked improvement, and McJannett can take a lot of the credit for this.
With Ally Gilchrist out injured for the long term, McJannett has stepped in and made the position his own. Declan Devine is already planning ahead for next season, and he will surely have McJannett high on his list of priorities.

BEST MOMENT OF THE SEASON
Adam Liddle vs. Finn Harps
Adam Liddle will not go down as a Derry City legend by any means but he will always be remembered for one key moment. Liddle was one of a few players who never got the chance to prove themselves at the Brandywell because of the coronavirus. In total he made 4 substitute appearances for the club before moving on – but he left the most enjoyable moment of the season at least.
Derry City were headed to defeat against Finn Harps in their first home game of the season.
Harps should have had the game won, but they were unable to add to their first half goal and Derry stayed alive as a result.
In the 94th minute, Walter Figueira showed a bit of magic on the right and worked his way into the penalty area before teeing up substitute Liddle who swept the ball into the net with virtually the final kick of the game to save a point.
The celebrations that followed were a mixture of relief as much as joy, scenes which are badly missed and which can hopefully return in 2021.