Akintunde believes it was Mission Impossible for Derry City players

'We were quarantining for basically a month' 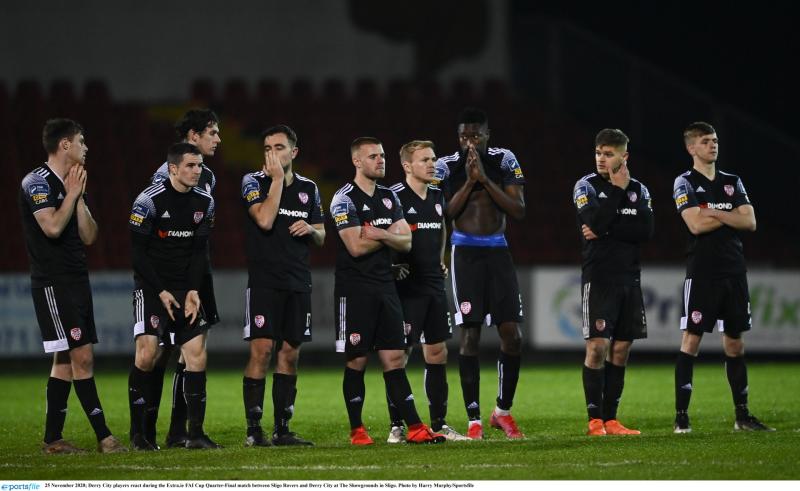 James Akintunde believes that Derry City were put into an impossible situation in the final month of the season, resulting in a poor run of results that cost the club European football and an FAI Cup.
The striker, whose contract at the Brandywell is now up, has been reflecting on the last few months ever since the Candystripes' penalty shoot-out defeat to Sligo Rovers in midweek brought a disappointing season to an end.
Akintunde joined the club in July and made 9 starts and 3 substitute appearances, scoring 4 goals in all, making him the club's joint top scorer in 2020 alongside Walter Figueira.
But with the club having to enter quarantine twice over the space of five weeks after two outbreaks of coronavirus in the squad, it meant little to no training time ahead of important league games against Shamrock Rovers, Cork City and then Sligo Rovers in the FAI Cup.
The striker, who didn't make it to last week's penalty shoot-out because of cramp, admits that the players were put into an impossible situation at the most critical stage of the season.
“It has been really difficult because of the circumstances,” he said.
“A couple of weeks ago we were thrown into a match and that was really tough because there was no match fitness, especially in the last game at Sligo.
“ I got tired and cramped up and that's why I was taken off in the 80th minute. That's because I had no training. It was tough because it happened to us on a few occasions, against Shamrock Rovers and then Sligo. We were quarantining for basically a month.”
There have been so many 'What if?' moments for Derry City this season, and despite the seventh place finish in the Premier Division, Akintunde strongly believes that European qualification should have been Derry's, only for key moments in games to go against them.
“It's definitely been a tough year,” he agreed.
“We have underachieved and we could have done so much better. The boys are great and the manager and the staff were great. It was just one of those seasons where it was the fine lines. There were games we could have won and we let them slip.
“If you look at Bohs when they got two goals in the last minute and when we played Sligo away; they beat us 1-0, but just before their goal we had a chance to score. It's just the fine lines. Those two games there, that's six points, but there are other games as well.
“This season has been painful, because it's just those little details in those games and we could really have achieved so much more.”

Future talks
Akintunde is now a free agent but he has not ruled out a return to Derry City in 2021. The striker will meet with City boss Declan Devine in the coming days, after which his future will be much clearer, but whatever happens, he believes in normal circumstances in a normal season, he would have had a much bigger impact at the club.
“I came in mid-season and I got a few goals,” he reflected. “I feel I could have got a few more. My contract is up now at Derry but I still have to talk to the gaffer. I'm not sure what's going on for now so I'll just wait and see. I did half a season so it would be nice to do a full season fully fit, but I'll have a chat with the gaffer and just take it from there.”