A disappointing season ends at the Sligo Showgrounds 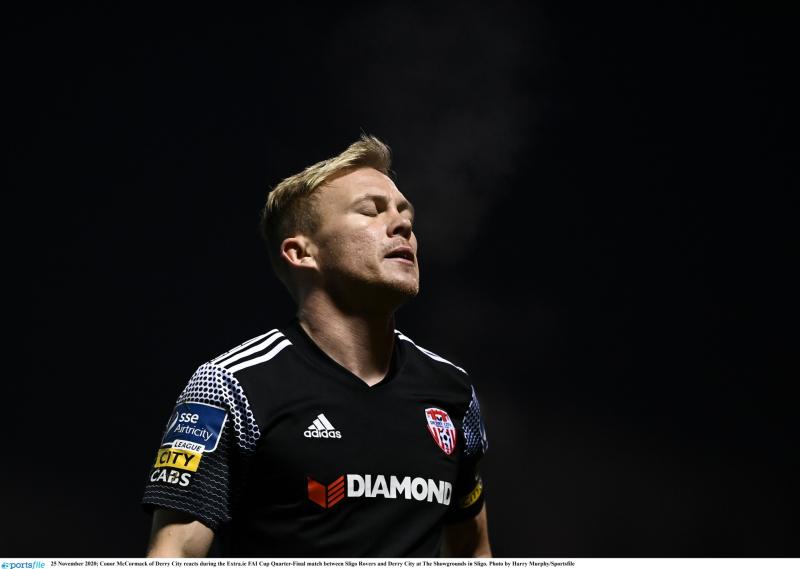 Derry City’s season came to an end at the Sligo Showgrounds as they failed miserably in a penalty shoot-out.

Conor McCormack, Walter Figueira and Ibrahim Meite all missed as Sligo eased through on penalties to book a place in the FAI Cup semi-finals against Shamrock Rovers this Sunday at Tallaght.

City ultimately paid the price for not taking their chances in normal time.

Derry City were well on top in the first half hour, playing with confidence and composure and really asking question of the hosts, but without really testing Ed MGinty in the Sligo goal. But it was the home team who came closest when Colm Horgan lost out to Junior Ogedi-Uzokwe, and the former Derry man played Ronan Coughlan in behind the defence, with Peter Cherrie having to save his team, stopping the shot with his feet to put the ball behind for a corner.

There was little in the way of goalmouth action and Derry City had to wait until the second half before worrying McGinty, Bruna’s free kick from 25 yards just clearing the upright as the Argentinian came close.

The Candystripes came agonisingly close to breaking the deadlock on 72 minutes when James Akintunde created something out of nothing, breaking in from the right wing past John Mahon before curling the ball past McGinty, only to miss the target by inches.

Derry City came close again just minutes later when substitute Ciaron Harkin’s quick thinking put Stephen Mallon through on goal but his low shot was kept out by the feet of McGinty. From the corner, Cameron McJannett crashed a header off the crossbar from close range and Sligo somehow survived.

The game went all the way to extra time and Sligo came closest when Regan Donelon’s free kick almost caught Peter Cherrie out but the Derry goalkeeper did brilliantly to punch the ball away at the last second.

It was left to penalties to decide the game and although former Candystripe Junior missed his kick, City missed three in succession to gift the game to Sligo, with Meite’s woeful effort ending City’s season.