Club advise however, that the 'financial cost to the club will be significant' if there are mass refunds 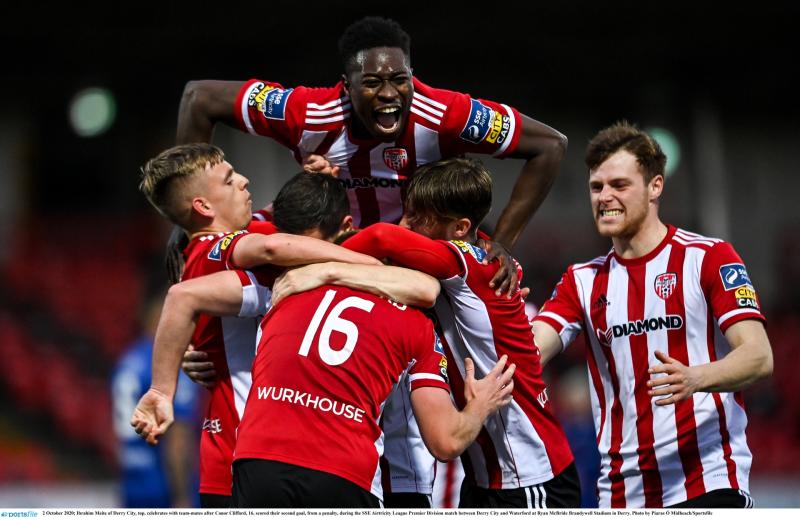 However, the club has advised that should a significant numbers of fans seek a refund, ‘the financial cost to the club will be significant’.

The club go on to insist however that ‘there will be no judgement or condemnation of any supporter who wishes to take up this option’.

Derry City fans have only been able to avail of two home games this calendar year because of the coronavirus pandemic.

“As we know, the 2020 season has been an unprecedented one for League of Ireland clubs, just as it has been for sporting organisations and businesses throughout the island. We understand that supporters have open questions as regards their season tickets.

“To facilitate access to City games, the club offered all season ticket holders a pass for the WATCHLOI service. This allowed supporters access not just to games held at the Brandywell, but also access to City’s away games. Supporters also had the opportunity to watch other League of Ireland games should they so wish. The platform also gave access to Extra.ie FAI Cup games, which are excluded from season tickets.

“Whilst we understand this was not the same as being able to attend the games in person, this allowed fans to access 16 games over the course of the season.

“It takes significant finances to run a League of Ireland club, particularly as the club spans senior teams for both men and women as well as 4 underage teams. On an annual basis, the revenue from season tickets, match day ticket sales, sponsorship and other income streams rarely cover the expenditure required to run the club.

“As you may expect, the club has incurred many of the same costs as an ordinary season, but has seen a significant reduction in income due to the fact that spectators were not able to attend games. “The reality is that the club would face significant financial challenges if it was not from the external financial support of the chairman and loyalty shown by season ticket holders.

“Derry City understands that supporters may find themselves under financial strain from the changed circumstances by the pandemic. We have looked at a range of options but the simplest solution is to offer the option of a refund to our season ticket holders for the value of the matches missed.

“Should every season ticket holder take up this option then we calculate the financial cost to the club will be significant, running to tens of thousands but we want to make this clear – there will be no judgement or condemnation of any supporter who wishes to take up this option.

“Some supporters have already indicated to us that they don’t wish any money back and we thank them wholeheartedly for this kind gesture.

“The club proposes that those supporters that wish to request a refund it will be refunded on the following basis.

“As noted, we would like to place on record our thanks for the many supporters who have contacted us and notified us that they do not expect to request a refund for their season ticket holders.

“If your financial position allows you to do that, we thank you for your support. We would also like to thank supporters that bought merchandise, programmes or supported any of our other efforts during the lockdown.

“Many of the same supporters have also contacted us to ask about season tickets for the 2021 season. At the moment, the club is reviewing options, and hope to make an announcement on options in the coming weeks.

“If you wish to request a refund, please contact dodie@derrycityfc.net for processing. If you have other circumstances that you wish to discuss with the club, please email us.

Season ticket refunds should be requested by 5pm on Monday 30th November 2020.

“Once again, we would like to thank you for your support. We understand that this year has been challenging for us all and we look forward to welcoming our season ticket holders, old and new, back to the games in the future.”