It's a never-ending season for Declan Devine and his players 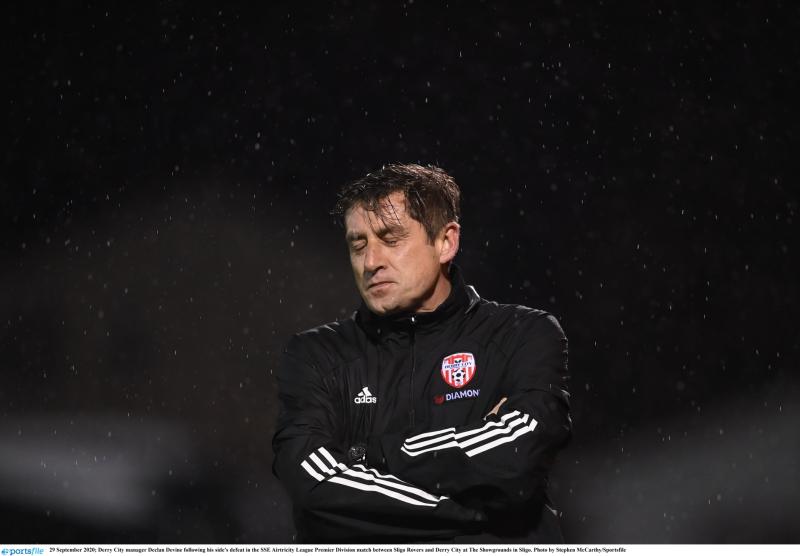 Derry City are remaining tight-lipped about the second Covid-19 outbreak at the Brandywell, which has resulted in their FAI Cup quarterfinal clash with Sligo Rovers being rescheduled for a second time.
The Candystripes were set to travel to the Sligo Showgrounds yesterday for the last eight tie, but that has now changed following news of a second coronavirus outbreak in just a few weeks. The cup tie will now take place next Wednesday, November 25 at 7:30pm.
Whilst the club have refused to give any details about the extent of the outbreak and have yet to release any official statement, Derry City's official Twitter account confirmed that the game had been postponed due to Covid.
The confirmation of the new twist in City's season came just on Wednesday morning when the FAI and Sligo Rovers released statements about the new date, although it was only the latter which stated that the game had been called off 'following an outbreak of Covid-19 within the Candystripes camp'.
This is another blow to Declan Devine and his staff and players, who were unable to prepare properly for their final two league games against Shamrock Rovers and Cork City after a Covid-19 outbreak at the Brandywell three weeks ago.
City were forced to play those two games, both away from home, over the space of three days having not trained for the two weeks previous, and managed just one point as a result.
The Derry News understands that a number of players in the City squad have been in isolation since the days following the league game at Cork City and will return to training early next week in preparation for the quarter-final. Defender Eoin Toal did appear for Northern Ireland U21s however in the 3-0 defeat to the Ukraine in the Euro U21 Qualifier in the Ukraine on Monday night.

Continuously
The FAI Cup game at the Sligo Showgrounds has been pushed back continuously since it was first announced.
The fixture was originally fixed for November 1, but was also postponed after the entire Derry squad went into isolation until November 6 after the emergence of positive Covid-19 tests. This latest postponement means that the game, if it goes ahead next week, will take place 24 days after it was first scheduled.
The winner of the game will eventually go on to face Shamrock Rovers in the FAI Cup semi-finals, a game which will be decided in Ballybofey tomorrow night. In the other semi-final, Athlone Town will face Dundalk.
The make-up of the remaining FAI Cup fixtures has changed completely this week with the FAI revealing that the final will take place on December 6, almost a whole month after the final league games were played.
The semi-finals were set to be played next Monday and Tuesday with the final on November 29.
Instead, the last-four clashes have been pushed to November 29 with the final delayed by a week until Sunday, December 6.
A venue for the decider has yet to be determined with Tallaght most likely to host the showpiece but that could change if Shamrock Rovers reach the final.
Should Derry City reach this season's FAI Cup final, their season will end almost 10 months after it began with a 1-0 defeat at Dundalk on February 14, a total of 296 days ago.