'Aaron has it in him to make it to the top' 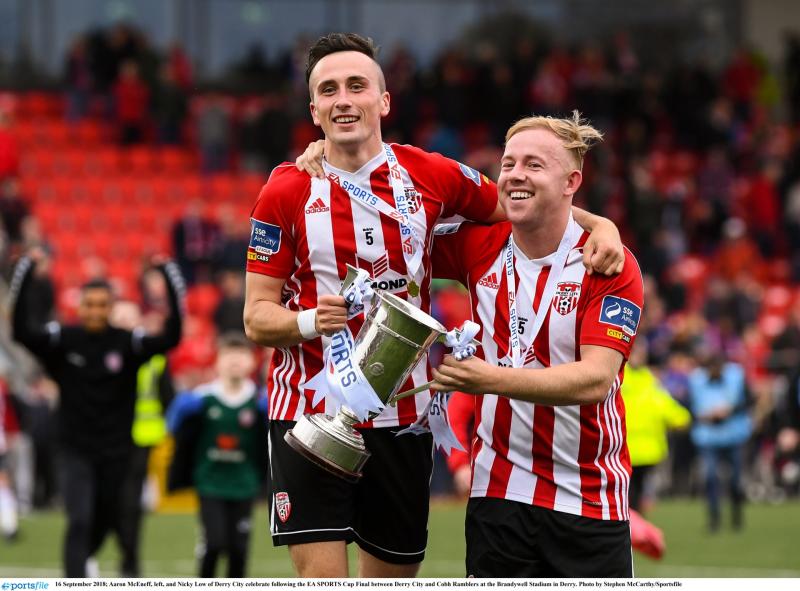 Aaron McEneff’s call up to the Republic of Ireland squad this week did not come as a surprise to former team mate Nicky Low, who expects the Derry man to go on and achieve big things in the game in the next few years.

Low, who played alongside McEneff for two seasons in 2017 and 2018, has watched McEneff mature as a player since leaving Derry City and has predicted that even Shamrock Rovers will be just a stepping stone for a player who can seemingly do no wrong at present.

“He’s a player who wants to go to the top,” he agreed.

“He is very driven. You see him in the gym sessions he would go to after training, he always pushed himself. He always did a bit extra, be it his finishing or his passing, he was always doing something extra, so you could tell he was going to the top.”

Low now expects his former team mate to continue to improve and as well as becoming a regular with the Republic of Ireland, he expects McEneff to land himself a return to England sooner rather than later.

“No disrespect to Shamrock Rovers who are a big club and a very good club, but I think Aaron will go on and get another move,” he stated.

“If you speak to Aaron, he’s not shy about his ambition. He will tell you he has ambitions to go to the top. He has won the League Cup at Derry and he has won the FAI Cup and the league with Shamrock Rovers, so he’s won everything in Ireland and I think maybe another season or two if he has a good season he will go across the water again. He’s absolutely got it in him to do so.

“I think he will be patient (with Ireland) and I think he’ll know he has to be. Obviously he’ll want to play and he’ll be frustrated if he doesn’t because if you’re called up you want to play.

“He just needs to work hard in training and stand out and hopefully he gets some time on the pitch to show what he is about. Whatever happens I think there will be more opportunities with Ireland because I think he will be getting called up a lot more.”