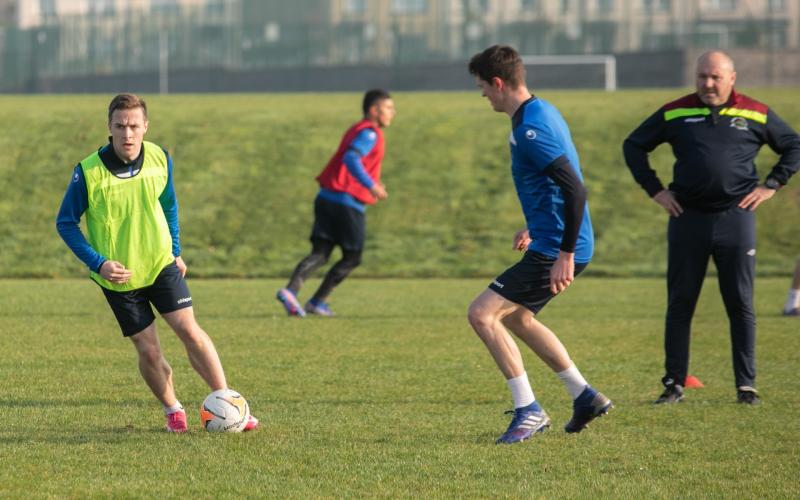 Sean Connor and his players are busy preparing for a new season, but haven't played a league fixture in six months. Pic by Tom Heaney nwpresspics

Sean Connor and a delegation of Championship managers have called on the NIFL to support the regrading of the Championship to elite status, claiming that the mental health and well-being of countless players is being affected as well as the very futures of clubs throughout the country.

The Institute manager and his colleagues released a lengthy statement yesterday morning called on MLAs and the Football League authorities to bring a sense of normality to 'a taxing and stressful situation for so many'.

While the Premier Division is well underway, the Championship remains on the shelf due to the decision not to award the division elite status. The league is finally set to start next Saturday, November 28, but only of current Covid-19 restrictions come to an end as scheduled, 24 hours earlier.

The statement insisted that the Championship is an elite organisation in all but status, and this must change as soon as possible.

“There are over 50 players on professional contracts operating in the NIFL Championship and 12 coaches with UEFA Pro-Licenses (or working towards this qualification). There are also quite a number of A and B licensed coaches as well as qualified physiotherapists and other support staff. The NIFL Championship is classified as ‘Senior’ by the NIFL and a ‘Professional’ league by the Irish FA. This is exactly the same definition as the NIFL Premiership. In addition, Sport NI define elite status as someone who ‘plays in a professional league or competition’ or derives a living from competing in sport’.

“Many of our clubs and players and coaches have ambitions to reach the premier division. We feel we have been let down by both our Local Government and our football authorities in relation to our attempt to start our league campaign because our inability to do so is directly linked to the elite status issue.

“Each club has invested substantial effort and resource ensuring that they have appropriately qualified staff and a designated COVID-19 officer. Are these people being told that they are less capable of controlling our environment and our reaction to this pandemic than those in similar positions at Premiership clubs?

As a group of highly qualified, focused and driven individuals we are well aware of the sacrifices that many individuals and groups have made in our societal effort to fight and reduce the spread of the COVID-19 virus.

“However, each and every manager has been contacted by players within our squads who have commented on the difficulties they are experiencing as a result of limited training and the uncertain prospect of our league commencing and being completed, even with a truncated or curtailed format.

“In addition, there are important financial implications for all our players who, although part-time, rely to a greater or lesser extent on their football related income.

“Herein lies the crux of the matter - What is the definition of elite? The NI Public Health Legislation (June 2020) concurs with the Sport NI definition of an elite athlete as someone who ‘plays in a professional league or competition’ or derives a living from competing in sport’.

“With over 70 professional players and coaches within our league, we believe that those players and coaches are being discriminated against by the non-elite grading of Championship football whilst the football authorities and the government have granted elite status to the Premiership

“The official NIFL website states that ‘The Northern Ireland Football League can only be as strong as our member clubs.

“Season by Season we are witnessing the fantastic work carried by clubs often with limited financial and human resources. The NIFL Club Development system is designed to offer support to our clubs’. The NIFL also state that they want, ‘to be a catalyst of positive change by providing leadership and support to Northern Ireland’s leading football clubs’.

“As a group of managers, we are asking NIFL to live up to their stated aim and to support the re-grading of the NIFL Championship to elite status, with immediate effect and allow players, coaches, members and fans of all our clubs to have a little solace in this extremely testing and unique time.

“Allow our clubs to be diligent and support our local communities by bringing some normality and balance in a time of great stress and discomfort to us all.

“To those in positions of authority and influence within the game, we ask you to be circumspect but also fair, we deplore you to work more closely with Championship clubs to be the catalyst for the positive and progressive change that you claim to aspire to. As a group we want to be heard and to be granted an urgent meeting with senior representatives from NIFL and the IFA in relation to our position on this matter.

“We will play our part, we will endeavor to promote correct COVID-19 etiquette within our environment. Help us to grow stronger and ensure when we are out of this crisis that our clubs are still here to nurture and pursue the hopes and aspirations of our players, our coaches, our volunteers, our supporters and our communities.”

For and On and Behalf of