'We have been unable to build any team spirit this year' 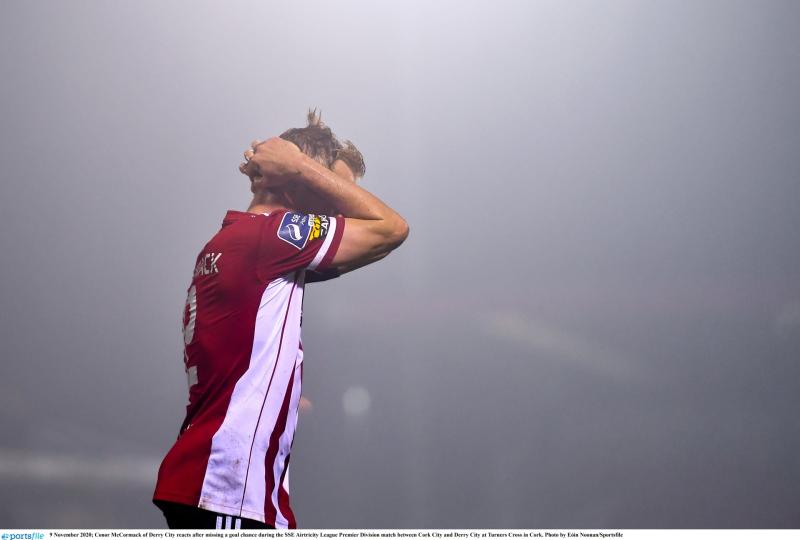 Declan Devine believes that the inability of his players to bond due to Covid-19 restrictions has been a huge factor in the team falling below expectations this season.
The Candystripes signed off their league season with a disappointing and flat 1-1 draw at Turners Cross last Monday, which meant a seventh place finish in the Premier Division.
City's performance in that game, and their performances throughout the season, have been inconsistent to say the least, and whilst there have been extenuating circumstances, Devine knows that standards have dropped.
Yet the Derry City boss is adamant that Monday's draw against Cork was in large part down to the hectic weekend which preceded it, something he has never before experienced in his career.
“The performance was nowhere near the level we wanted it to be at, but there were difficult circumstances,” he explained.
“The fact that we didn't train for two weeks and then had to go and play a match at 3 o'clock on the Saturday and then travel straight away down to another match 48 hours later; that had a big bearing on the performance.
“The ability for quite a lot of players to play two games in three days having not trained for a two-week period was a big factor..
“In hindsight, yes, it wasn't a good enough performance from us, there's no doubt about that, but we had to deal with a lot of issues going into the game in terms of freshness and fitness levels. To play two games in three days and the travelling involved is something I've never had to do in my career.”
A five month break was following by a playing schedule that was sporadic for most teams, and with health and safety protocols to follow because of growing coronavirus concerns in the Derry area, off-field preparations were significantly affected also. Despite the frustrations, Devine has kept his head up.
“My motivation all year has been very high because it's a job that means a lot to me and it means a lot to the staff,” he insisted.
“We should have done better than what we have done in our league campaign, there's no doubt about that, but you only have to assess what way the league has gone, from Dundalk right down, it's been crazy.
“There are a lot of things that we have to strive to do better, especially individually and collectively as a team. Our appetite and willingness to win games has got to be better. It has been very difficult. It's hard to form a spirit and hard to form a bond.
“We've brought 14 or 15 players into the club this year and we haven't been able to bond them in the way we have with other teams.  We don't have a changing facility, on a daily basis players are turning up to training and doing their two hours then leaving in their cars so they don't see each other to their next training session.
“It's been very difficult to build those relationships. It's been one thing after the other but the bottom line is that while the performance level this year hasn't been good enough, we still have a lot to play for.”