'We know what the consequences are' 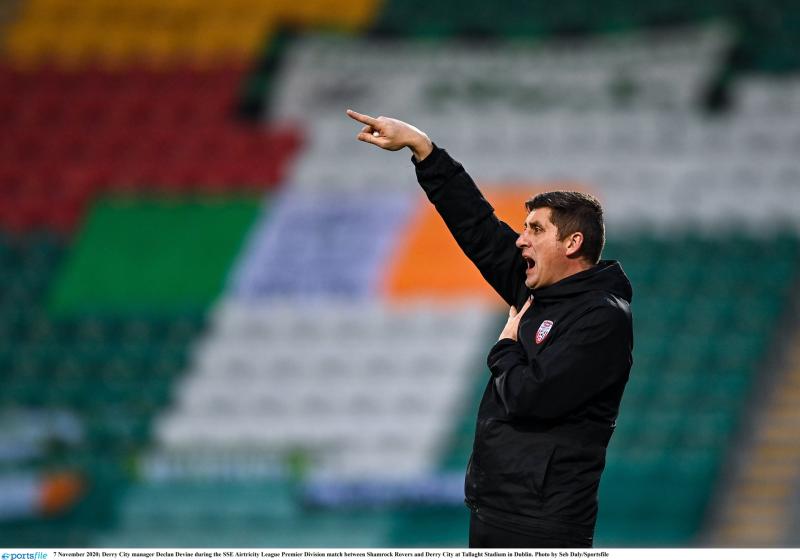 Declan Devine insists that he and the players realise the consequences of losing at Cork City tonight as Derry City head to Turners Cross needing a point to avoid being dragged into the relegation play-off place.
The stakes are high for a number of teams in the Premier Division tonight, City included, as anything less than a point could see City finish in 9th place and facing a play-off against either Longford or Galway United.
For that to happen, Shelbourne and Finn Harps would both have to win their respective home games against Shamrock Rovers and Waterford. A number of results would need to go against the Candystripes for this situation to go against Derry City, but they can remove any worry by getting a positive result at Turners Cross. Devine understands the situation exactly.
“We need a result and other teams need results,” he acknowledged.
“There is a lot to be played for in the last game of the season. We're disappointed that we didn't get anything from Saturday's game but ultimately we know what the consequences are if we don't win, so we're going to Cork and we're preparing as well as we can. It will be great to get out training in Cork and before the game, and to get a bit of training time will be key for us.”
City's 2-0 loss at Shamrock Rovers saw any lingering hope of European qualification disappear, but was no great surprise given the circumstances going into the game against the champions.
“It has been a hugely difficult two weeks, trying to prepare for a game knowing that you haven't seen your players and that the players have had no activity on a football pitch,” Devine explained.
“There's certainly easier games that we could have had on the back of no minutes on a training pitch for two weeks. To come to the home of the champions, who are playing with a real swagger, a real belief and a real high level of quality in terms of possession and ball retention.
“I can't fault one player. Every single player came here with a fantastic attitude. They knew it was going to be difficult but at the same time I've never experienced anything like it, to get through a game of this magnitude with absolutely zero preparation. ”

One last game
City head to Turners Cross tonight with a number of players already ruled out, meaning that a patched up team must pick up the one point required to ensure this season doesn't extend longer than it needs to.
“I think we have made changes at the right time to try and keep people as fresh as we possible can,” Devine said. “It was about making changes so that people could be ready for Monday.
“We were missing a lot of players; Colm Horgan, Stephen Mallon, Ibrahim Meite, Ally Gilchrist, Mark McChrystal, and my assistant manager. It has been a difficult couple of weeks but at the same time, the lads in the changing room, we'll not let them get too downbeat about Saturday because it was always going to be a big ask. We'll go and make sure we're ready for Cork now.”