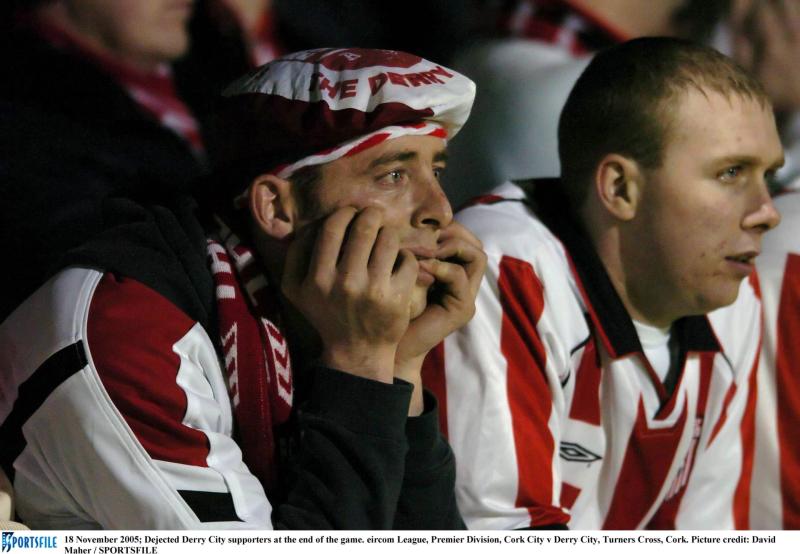 Fifteen years on from one of the most painful nights in the club’s history, Derry City meet Cork City in the final game of the league season, in significantly different circumstances for both.

November 18, 2005 proved to be one of the most heart-wrenching dates in the club’s history, on a par with Athlone back in 1995, and tonight’s fixture undoubtedly stirs up memories of that crushing night.

Needing just a point to win the title, Derry was awash with excitement in the week heading up to the game. Stephen Kenny, in his first full season in charge, believed that his team had not received the recognition it deserved in the build-up, urged his players to finish the job.

Another subplot was Peter Hutton’s desire to become the first man to captain Derry City to two league titles. All that was needed was one final performance, one final point, to take Kenny’s team over the line.

But in front of 10,000 packed into Turner’s Cross for the title decider, Derry hearts were broken.

It became apparent early on that the visitors were struggling, as the players in green ran them ragged in a one-sided opening period. Just 18 minutes in, the hosts had the goal they craved as John O’Flynn struck the ball past David Forde to edge Cork closer to the title.

Needing a goal to get back into it, Stephen Kenny introduced Paddy McCourt in the second half, but the winger had not even touched the ball before Cork made it 2-0, Liam Kearney getting on the end of a cross from Denis Behan to fire past an exposed Forde.

Derry had one chance to get back into the game when Gareth McGlynn’s cross found McCourt unmarked at the back post, but he sent his header straight at Michael Devine, who pushed the ball to safety. Killian Brennan then sent a late free kick onto the crossbar, but by then, it was too little, too late.

In the most painful of circumstances, Derry had lost their grip on the league title, and it was Cork City who celebrated a memorable championship win, their first in 12 years.

Over the years, City’s record at Turners Cross has been poor, but that long run without a league win ended last year when Junior Ogedi-Uzokwe scored a hat trick in a 4-1 win on Leeside. That was only City’s second league win at Cork City sine that night in 2005, the only other victory coming in 2013 when Rory Patterson hit a late winner.

There have been some memorable cup victories at Turners Cross, none more so than the 2011 League Cup final settled in City’s favour by a second half Eamon Zayed penalty.

Tonight’s game could be another chapter in the long history between the two clubs. Cork City, already relegated, can drag Derry City right down with them with a win, with the Candystripes potentially ending the season in the relegation play-off spot if they lose.

A single point however should be enough for Declan Devine’s men. They go south far from confident however, following a recent Covid-19 outbreak at the club, several players missing, and having just come off a defeat at Shamrock Rovers, a game played with no preparation.

The worst shouldn’t happen, but it is not impossible. There were Derry City tears on that night in 2005. Hopefully this is not so painful.