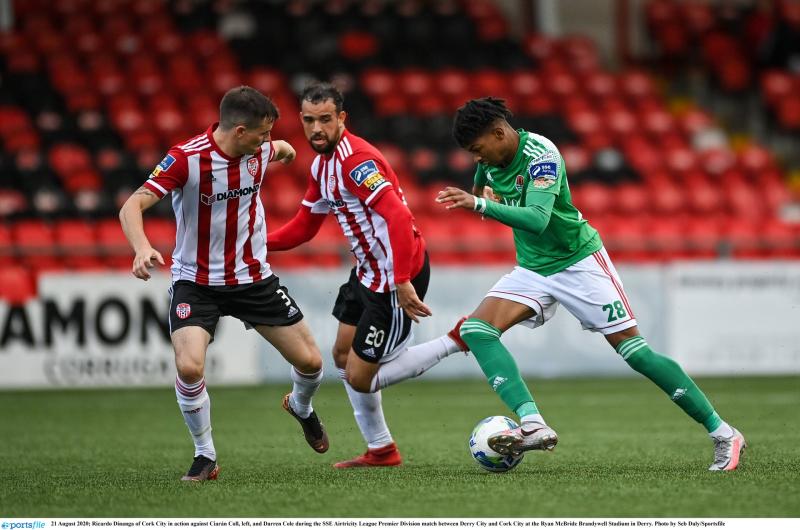 Conor McCormack is sure that Derry City will not be dragged into the relegation play-off place tonight, but as long as the possibility exists, he is eager to get the job done at Cork City.
The Candystripes need a point to be sure of safety in the final league game of the season tonight, with a number of teams all in danger of slipping into 9th place, which is currently occupied by Finn Harps.
Defeat for Derry, along with wins for both Shelbourne and Harps, against Shamrock Rovers and Waterford respectively, would see City slip into the play-off spot. City are favourites against already-relegated Cork City, but on the back of two weeks without training due to a Covid-19 outbreak at the Brandhywell and a 2-0 defeat at Tallaght on Saturday, they are not firing on all cylinders by any means.
“We'll not worry about anyone else, and we'll concentrate on our own game and our own performance,” captain Conor McCormack said. “Our mindset is to go and win the game. Whatever happens happens but I'm sure that we'll put in a  performance and we'll be fine.
“We just take every game as it comes. Unfortunately we didn't get any points on Saturday but it's good that we have a quick game and a quick turnaround so we can go into the game tomorrow and hopefully do our best and hopefully get a few points.”
City had a number of players missing at Shamrock Rovers on Saturday and they are likely to be short again for the last league game of a tumultuous campaign.
“It has been difficult,” McCormack admitted.
“Even if you miss a day or two days you do feel it when you come back, that you're not as sharp as you should be, especially if you're not even allowed to go out and train by yourself because you're housebound. It is pretty tough. We were lucky to even get the game back at the weekend but unfortunately we didn't take any of the points. But we're really looking forward to Monday night and hopefully it goes okay for us.”
McCormack was a league title and FAI Cup winner with Cork City in 2017, but he returns to a club a shadow if itself tonight. The midfielder has plenty of sympathy for his former club and admits any club could have slipped into such disarray given the bizarre season that 2020 has been.
“The whole season has been stop-start, up and down and topsy-turvy," he explained. "Every week there is a rule change and something happens, and games are  called off here, there and everywhere. It's just been mental for everybody, the players, the staff and the clubs.  It's a game I can't wait for because I always like playing in Turner's Cross and hopefully we can get the win and look forward to the cup game.”