No sanctions to be imposed on Derry City over Rovers cancellation 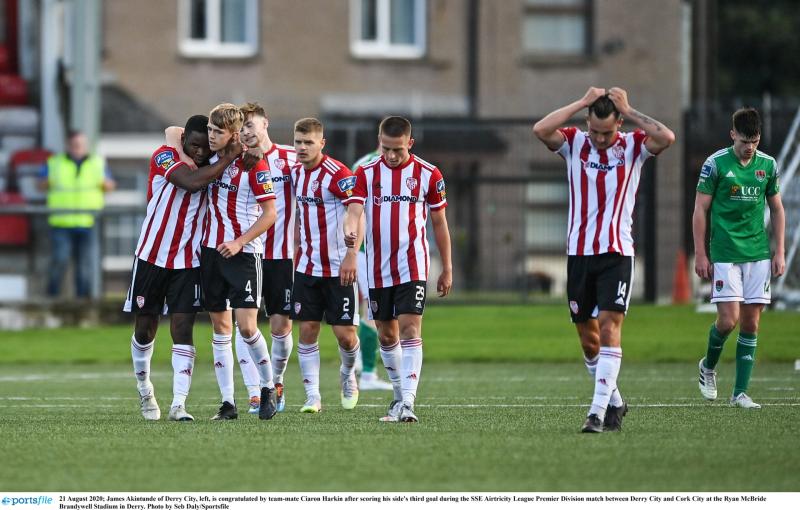 Derry City will face Shamrock Rovers after all

The postponed league game between Derry City and Shamrock Rovers at Tallaght is set to be played this weekend, followed a ruling by the FAI Disciplinary Committee.

There had been fears that the Candystripes would be punished with a 3-0 walkover for their failure to fulfil last Wednesday’s fixture after the FAI referred the case to the Disciplinary Committee.

An outbreak of Covid-19 amongst the Rovers players caused the game to be rescheduled on Friday, October 16, while an outbreak amongst the City squad then saw the fixture cancelled on October 28.

The Candystripes were set to travel to Turners Cross this weekend to play on Sunday what was supposed to be their final league fixture against Cork City, but with the Rovers game now on Saturday, the game at Cork, will now take place on Monday.

A statement released this evening said:

“Following Derry City’s failure to fulfil the scheduled SSE Airtricity League fixture against Shamrock Rovers on October 28th, the Independent Disciplinary Committee of the Football Association of Ireland has today ruled that no sanctions will be imposed on the club.

“The charge was brought in accordance with FAI rules after a COVID-19 outbreak and the decision of the Northern Ireland Public Health Agency to stand down their first team squad, left Derry City unable to fulfil the fixture.

“The Shamrock Rovers v Derry City game has now been rescheduled for this Saturday, November 7, at Tallaght Stadium, with a 3pm kick-off time. Consequently, the final series of games in the SSE Airtricity League Premier Division will now place next Monday night, November 9, with all five games scheduled for 7.30pm.”