Dolan O'Hagan, a Derry city man now working as a journalist in Cork, was a member of the 1989 Derry minor squad which won the 1989 All-Ireland minor title. He argues that a team drawn from all Derry city GAA clubs should compete in next year's Derry senior club football championship 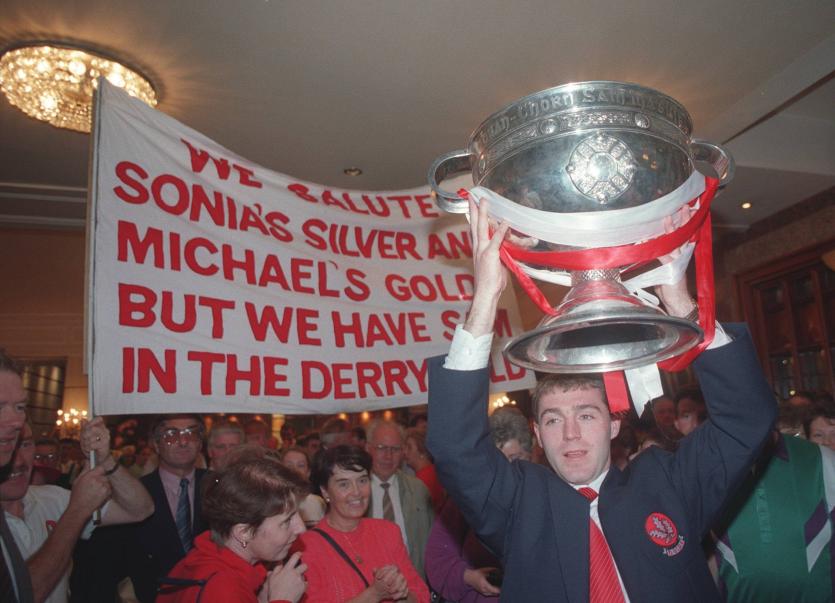 The Ogs, of course, going down in heartbreaking fashion to the men from Greenlough in this year's intermediate final.

Achieving what all good writers should, he prompted a fair bit of reaction and reflection from those who were lucky enough to read his piece.

No more so, than myself. His musings prompting a flood of memories of my own time playing gaelic football in the city.

My efforts being with Doire Colmcille from the mid 80s to the late 90's with a brief hiatus at the newly-reformed Ardmore GFC somewhere in between.

The picture pianted by Conan of his Steelstown's failure - as yet - to collect any shape of a senior men's title resonated all to well with my own memories of donning the black and amber of both Colmcille's and Ardmore.

No more so than on what transpired to be my rather ignominious final club game in Derry, in the summer of 1998, when an excellent Doire Colmcille side lost badly to Faughanvale in an IFC semi-final replay.

This after we'd thrown away what looked like a certain victory in the first game - and what would have been a first-ever appearance in an intermediate club final - conceding a late point after leading by five or six points at one stage.

That replay was made all the more painful for me as the Colmcille manager (who will remain nameless) had, in his wisdom, decided to make a point of dropping me to the subs bench - a decision announced on the morning of the game - despite what I knew was an excellent performance against a strong 'Vale midfield in the first game.

The decision in the intervening weekend to attend my then girlfriend's (and now wife's) birthday party in Belfast and miss an extra weekend training session.

Time to let it go I hear you say. But the hurt I felt that morning as the news was broken to me outside Da Vinci's and the disappointment I felt on the road back from Dungiven has stuck with me through all these years.

Despite coming on with 20 minutes to play there was little I could do to turn round what was a near double score deficit at that stage.

The worst possible feeling in sport was accentuated by the fact that I had - through no fault of my own - left plenty in the changing room that day!

Those feelings were captured brilliantly and reawakened by Conan's recent piece.I think even Conan might agree, however, that some things are even more important than football.

Who knows, had I missed that birthday party the woman who stood by me for the past 20 odd years may have decided I wasn't the man for her.

Even a Derry intermediate championship medal would not have made up for that!

Anyway, while it's good to revisit the past from time to time the point of this trip down memory lane is rooted more in a couple of thoughts that crossed my mind recently as I watched live streams of this year's Cork senior football championship semi-finals from the comfort of my Cork home.

Thoughts which were reignited a few days later when I came across Conan's piece on twitter after it was shared by the managing editor of these pages and who, if you are reading this, has agreed to share them with you.

Why - in all the years since I made my senior Doire Colmcille debut as a 14-year-old in 1985 on a beautiful summer's night in Claudy is it the case that not one city club player has collected an intermediate or senior club winners medal in Derry.

And, more importantly, what can be done to rectify that so another 30 years do not go by without any success.

Thankfully I was lucky enough to gain a little success outside Derry city club football winning an All-Ireland with the Derry minor team in 1989, a McLarnon Cup runners-up medal for St Columb's in the same year and a Louth Senior Football Championship medal with Drogheda club, Newtown Blues (below), in 2000.

It is undoubtedly my biggest regret, however, that I have nothing to show, except memories of some fine people and some good times, for all the years I played senior men's football in Derry.

As stated, it was watching this year's Cork senior championship semi-finals - contested by two Cork city clubs - that I was reminded of how dysfunctional that lack of success is.

My involvement with Gaelic games now revolves around helping out with my daughters U-11 and U-12 side at Cork intermediate club, St Michaels.

They are a club whose senior men's team have contested the last four county intermediate finals but who are still largely outshone - but not always on the pitch - by the three larger clubs in the city, Douglas, Nemo Rangers, and St Finbarrs.

Sides who are never far away when it comes to the business end of the county's senior premier football championship.

In fact it is only because St Finbarr's suffered a heartbreaking defeat on penalties in their semi-final that this year's senior final is not an all Cork city affair.

Rivals, Nemo Rangers, making the final after their defeat of north Cork 'divisional' side Duhallow.

This success despite the fact that Cork city is not recognized as a football city, hurling being the undoubted passion of most city gaels.

So while there have been some great advances in the development of Gaelic games in Derry city in recent years it is clear it has a long way to go to emulate the progress of Ireland's other second city.

Which brings me to that other thought. What to do?

Arguably the greatest development for Gaelic games in Derry city in the last decade has been the decision to enter Cathair Doire, a city team drawn from the region's schools, in the MacRory Cup competition.

That sort of arrangement and thinking has been a bulwark of Gaelic games development in county Cork since the 1920's.

Duhallow, the divisional side defeated by Nemo Rangers in this year's Cork SFC semi final, is an amalgamation of players from junior and intermediate clubs from northwest Cork who, since their formation in the 1930s, have collected three senior Cork titles and are always competitive at the highest level.

They are one of eight divisional sides in the county who draw on players from a variety of smaller clubs competing at junior or intermediate level who are then entered in the county's senior football and hurling championship competitions.

It is an arrangement which is mirrored in Kerry where regional or divisional sides - drawn from smaller clubs in specific regions - compete with much success in the county's senior football championship.

It is not something that has really caught on elsewhere in the country but one has to ask why given both counties continued success at club and inter-county level!

Perhaps it is time the Derry City board put aside any club rivalries and demanded a divisional side - drawn from the city's intermediate and junior clubs - be entered in next year's senior football championship.

The city clubs can continue to compete as club entities in their respective junior and intermediate competitions but a selection of players from these clubs - selected by a management team drawn from the region - will also compete in the senior club football competition.

Having been brought up in the city I know that Derry people will get behind a team that is able to compete at the highest level and only when that happens will we see the true potential of Gaelic football in the city start to be realised.

It is a potential that needs to be realized because with the evolution and professionalism of the game elsewhere - not least in Cork, Kerry, Tyrone, Mayo, and Dublin - the simple fact is that the chances of Derry collecting a second Sam Maguire without a strong contingent of city players on the team is not only slim, it is - in my view - impossible.