Consistency could give Armagh the edge on improving Derry

The sides meet in the Ulster senior football championship on Sunday at Celtic Park. 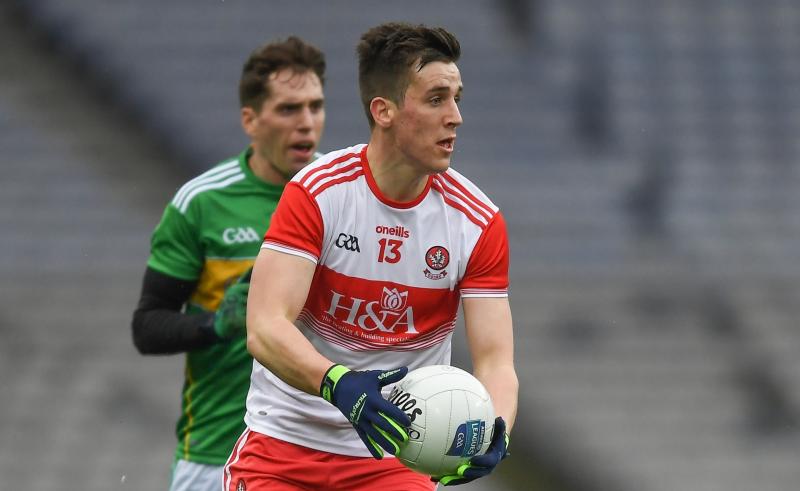 Shane McGuigan will lead the Derry attack, but reinforcements are arriving. Pic by Ray McManus/Sportsfile.

The anticipation of championship action has a different backdrop this year, but the summer of scintillating club action has whetted, rather than dampened the appetite for more.

Derry enter their Ulster football championship campaign with a quarter-final clash against an Armagh side fresh from promotion to Division 1 of the National Football League.

The Orchard County sealed their passage into the top flight last weekend with a five-point win over Clare and the achievement should give them a boost going into Sunday's game.

It was a timely boost for Armagh after they kicked off their post-lockdown season by leaking three goals in a defeat to table-topping Roscommon.

Derry hit three goals of real quality over their two games since the league's resumption. 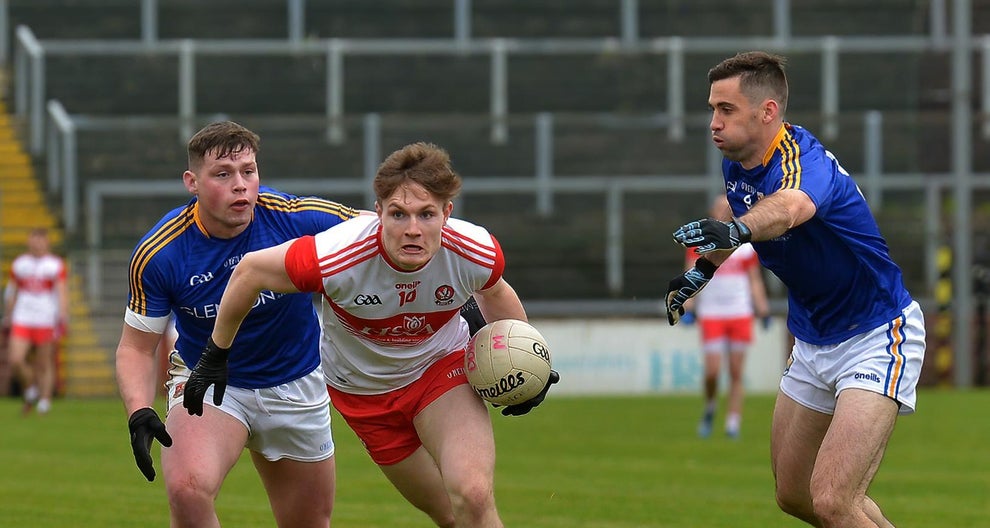 Ethan Doherty has made an impression since his debut against Longford.

Patrick Kearney and Paul Cassidy found the net in a 2-14 to 0-12 win over Longford, while Ethan Doherty, in only his second appearance at this level, rifled home as the Oakleafers saw off Offaly.

The long-awaited senior appearance of Glen's Conor Glass has given this game an extra sprinkling of intrigue as he prepares to make his championship debut at the weekend.

Glass partnered fellow clubman Ciaran McFaul in midfield for the win over Offaly, a midfield pairing that will have pulses racing throughout the county in the run-up to this Ulster quarter-final.

There is a wealth of talent on either side of them. Odhran Lynch's accuracy from kick outs has been a feature of Magherafelt's recent success, and he is performing in a Derry jersey too.

Derry scored from their first four kickouts against Offaly, and Lynch's kick to find Pádraig Cassidy provided the foundation for the move that ended with Ethan Doherty's blasted finish.

In front of him, Brendan Rogers and Chrissy McKaigue are flanked by very mobile defenders, with Doherty and Conor McCluskey more than happy to raid forward and hurt the opposition.

Shane McGuigan has led the way throughout the league, registering a total of 2-35, but there are signs reinforcements are arriving to support the talismanic Slaughtneil man.

“We maybe have been relying too heavily on Shane McGuigan so far and it's important that we get other players to step up to the mark,” said manager Rory Gallagher back in February.

Armagh though, have firepower of their own. They hit 130 points during the league and finished with a score difference of +27.

Rían O'Neill top-scored with 0-30, while Rory Grugan's 1-16 was also important in helping them clinch promotion. 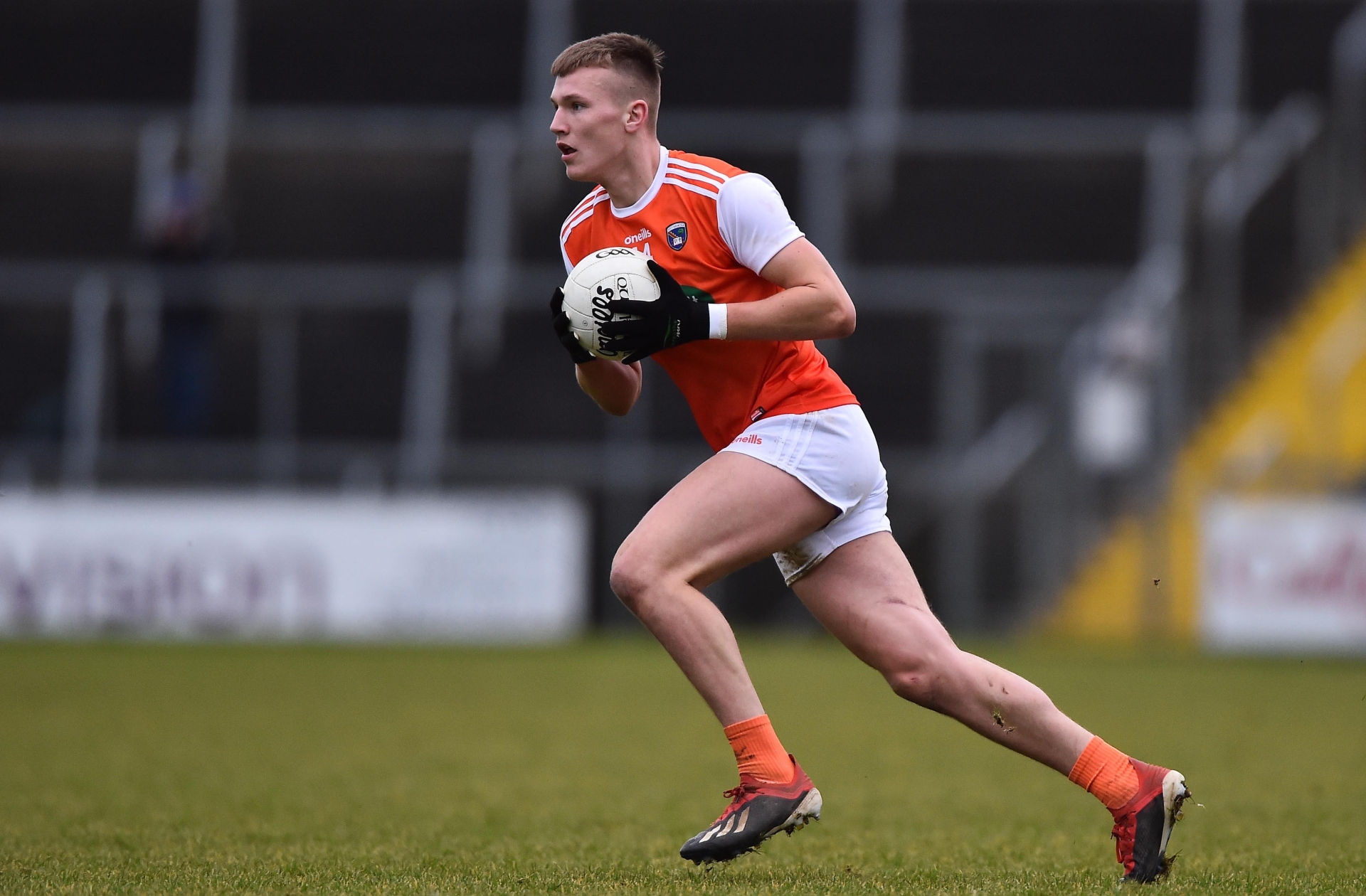 Ten different scorers helped them to victory over Clare and Kieran McGeeney's team have a settled look, with this being the Mullaghbawn man's sixth year in charge.

Paddy Burns is a tough man marker and is likely to pick up Shane McGuigan, while the possibility of Grimley and Oisín O'Neill facing Glass and McFaul in midfield is one worth tuning in for.

Jamie Clarke continues to provide a touch of class in the Orchard forward line, and is likely to be tracked by the tenacious Paul McNeill, while Rían O'Neill and Brendan Rogers will be another key battle.

The Orchard County will see their promotion to Division 1 as affirmation of their place in the upper tier of Ulster football's ecosystem, but last year's semi final appearance was their first under McGeeney.

Derry can match their single Ulster semi final appearance in those five years, but Armagh have had a much better record in the Qualifiers,

That consistency could prove to be the element that tips the balance in Armagh's favour. Their side has a more settled look and they have had the time required to become rehearsed in their system of play.

Derry, having gone through four managers during the same period, have not had that luxury, and with Gallagher's first year disrupted by Covid-19, the squad's time together has been limited.

The challenge of overcoming a well-drilled Armagh side, fresh from a morale-boosting promotion, could prove a step too far for an improving Derry side.

However, the winner-takes-all format of a 2020 championship in autumnal conditions leaves the door well and truly open for the underdog.

As RTÉ Sport's revised championship slogan would lead you to believe, anything can happen.