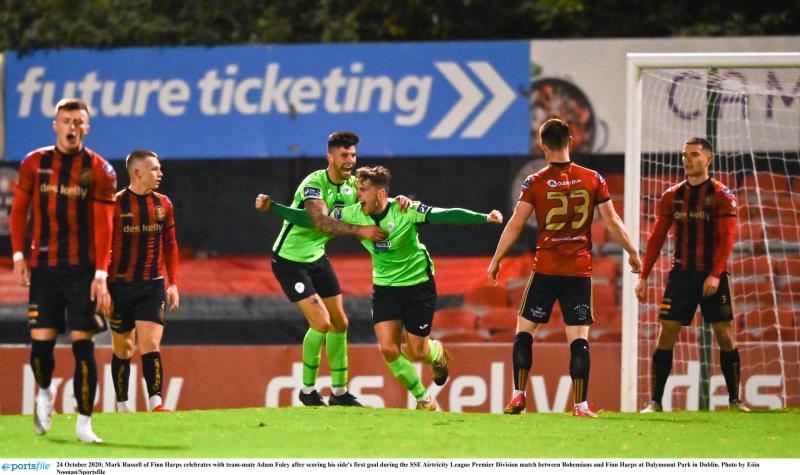 Finn Harps’ fate is very much in their own hands as they picked up an invaluable win at Bohemians which had implications at both the top and bottom of the Premier Division.

Two goals from Mark Russell gave Harps the win in what was the Ballybofey club’s first game in almost three weeks, and the goal scorer was the toast of the other side of Dublin with his double also confirming the league title for Shamrock Rovers.

The result was significant for Harps at the bottom of the table also as it relegated Cork City, who had lost to Sligo Rovers earlier in the day.

Harps can now avoid a relegation-promotion play-off if they pick up enough points in their last three games, all of which are home against St. Patrick’s Athletic, Shamrock Rovers and Waterford.

Keith Long’s side only needed a point to secure second place but defeat means there is still an outside chance that the newly deposed champions Dundalk can pip them for second place.

Tony McNamee’s long throws had caused Bohs difficulties throughout the opening 45 minutes and it was his final effort of the first half that brought the opener for Harps.

There was a bit of head tennis before Kosovar Sadiki headed the ball goalwards and Mark Russell spun to fire the ball into the roof of the net.

Six minutes into the second half Russell had got his second as Barry McNamee played Adam Foley into a good position and his low cross found Russell who drove the ball home past Talbot.

Whatever chance Bohs had of getting back into the game disappeared when Anto Breslin was red carded.