Victory for Declan Devine in 150th game in charge 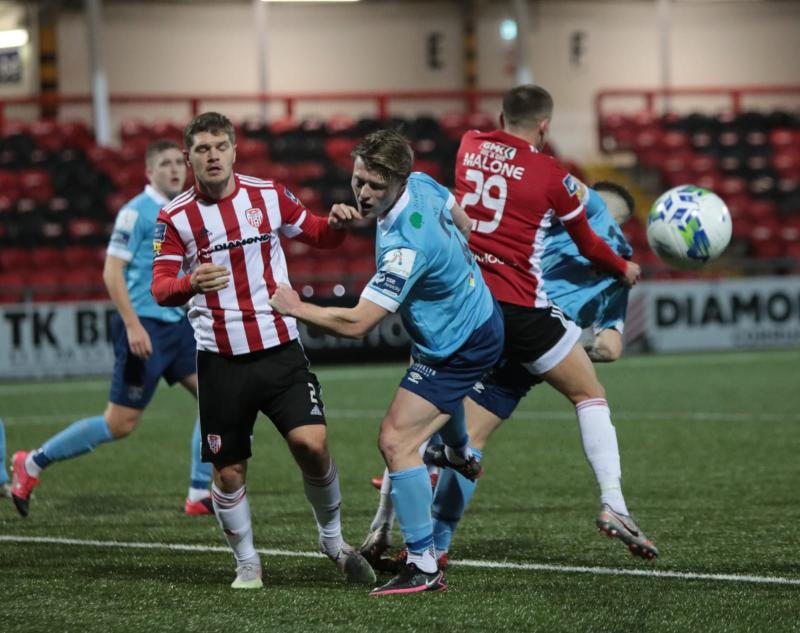 Action from Derry City's victory over Shelbourne at the Brandywell. Pic by Tom Heaney, nwpresspics

Derry City eased to a win over a disappointing Shelbourne side on a bitterly cold night at the Brandywell.

Victories have been hard to come by for Declan Devine’s team this season, but it was never in doubt after Joe Thomson fire them into a first half lead, and when Walter Figueira struck on the hour it was game over.

Derry City almost took the lead in sensational circumstances straight from the kick off. Conor Clifford played the ball immediately forward and when Oscar Brennan headed it down, it fell for Adam Hammill on the corner of the area. Hammill immediately went for goal, curling the ball over goalkeeper Jack Brady, and the ball bounced off the top of the crossbar.

Derry were bossing possession and asking all the questions and Joe, Thomson, on his first league start since the victory over Cork back in August, came close when he latched onto the rebound following another Hammill cross, with a ferocious effort from the edge of the area which just cleared Brady’s crossbar.

Thomson was persistent however and gave Derry City the lead just 60 seconds later. Ryan Brennan got into trouble on the edge of his own penalty area, and Thomson took advantage, holding off the Shels man before firing the ball low past Brady to give the Candystripes a deserved lead on 20 minutes.

City’s doubled their lead on the hour when Hammill worked his way in from the right byline, and although his attempted pass saw the ball deflect onto the post, it fell kindly for Walter Figueira who could not miss as he fired in his fourth goal of the season.

Shels seemed to lack any motivation to get back into the game but they finally tested Peter Cherrie on 81 minutes when substitute Jaze Kabia had a chance but was denied by the City goalkeeper from close range.

The comeback never looked likely however and City almost sealed it in spectacular fashion as Hammill tried his luck again from 20 yards, and the ball flew past Brady but struck the inside of the post and somehow stayed out.