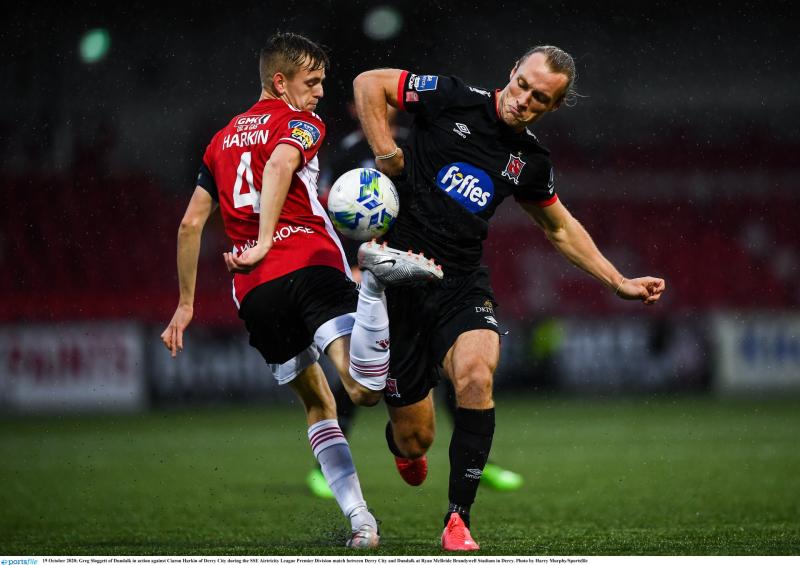 Eighth place in the table does not make good reading or Derry City at present, and Ciaron Harkin for one is determined that the results improve in the final two weeks of the season.

A lot can be said about the reasons behind City’s struggles this year, but with work still to be done, the season analysis can come in due course for Harkin, who captained the team in the absence of the suspended Conor McCormack against Dundalk.

Harkin was as disappointed as anyone with the result, admitting he’s just about fed up with losing to the champions again and again.

“We up our game to play them but every time it just isn’t good enough,” he said. “We were well in the game but we go behind every time and we just can’t get that win.

“We were looking for the three points and we were looking for a good performance but it just wasn’t our night. We had a bad start to the game and it cost us. It took the two goals to actually wake us up but then we came at them hard and we actually played some good football in the first half.

Making it worse for Harkin and Derry City was that the winning goal was a gift, and teams like Dundalk are never likely to pass up those opportunities.

“When you give a team an advantage of two goals, especially when they are a good team with a good defence it’s going to be an uphill battle trying to get the goals back,” Harkin continued. “We got one back straight away and we pushed for the second but we just didn’t have the bite and the cutting edge to break through and get that second goal. We have to go into Friday now and make sure we get the three points with a batter performance.”

Last home game of the season

City face Shelbourne tomorrow night in their final home game of the season, before travelling to Shamrock Rovers in midweek and then onto Cork for the final league game of the season. There remains a very slim chance that City can sneak into the European spots, but they would need a lot of things to go their way, not least of all three wins from three themselves.

“We want to finish the season on a high,” Harkin insisted. “We wanted to start that way against Dundalk but that’s past now and we go into Friday hoping to do a lot more than we did against Dundalk to get that.

“It’s a must three points. We have to move up that table and get as many points as we can in the next three games to finish off a poor season well. We’ve had a lot of ups and downs but it just hasn’t been our year but hopefully we can finish as high as possible in the table.”

As well as those three league games, City also have the matter of Sligo Rovers in the quarterfinals of the FAI Cup, giving Harkin belief that City can still salvage something from 2020.

“We still have a lot to play for,” he stated. “There’s the cup and there’s still a European place to play for but t’s a big three games now and it’s about getting as many points as we can on the board and see where it takes us.”