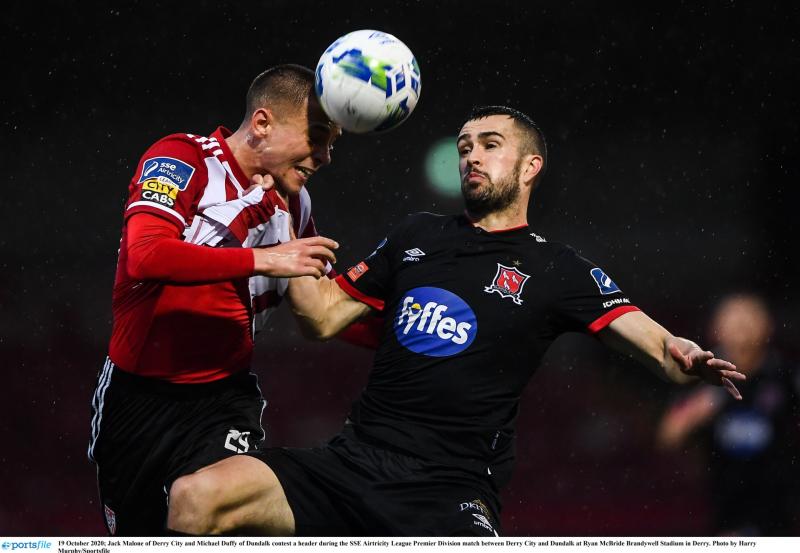 Derry City face Shelbourne tonight in their final league game of the season at the Bradywell.

Derry City and Shelbourne meet for the 100th time tonight in the latest installment between two great rivals.

There have been plenty of memorable incidents and dramas between the two over the years, but this will be the first time that Shels have played a league game at the Brandywell in over 7 years thanks to their extended stay in Division 1.

It is a game that every Derry City fan looks forward to and Declan Devine, who has been involved in plenty of battles with the Dubliners over the years, is looking forward to another one.

“Shelbourne have done really well and there’s a lot of experience in their team,” Devine continued. “They have a lot of good players and it will be a very difficult game because they are very aggressive in the way that they play. They had two narrow wins against Sligo and Waterford so we’re under no illusions that it’s going to be a difficult game.

It has been a frustrating season for Devine and his players, who now face a race to the finish with three games squeezed into the next ten days.

“It’s been so stop-start,” Devine agreed. “There were 17 days between the Waterford and Dundalk games and then we have 3 games in 9 days. It’s just been so crazy but we have to take away that excuse because it’s been the same for everybody. We just have to have a real focus going into the game on Friday and hopefully come out with the points that we want.”

Having narrowly lost to Dundalk on Monday past, Devine is still hopeful that his team can make this season count by stepping up in the next few games.

Stephen Mallon and James Akintunde are considered doubtful for tonight's game while Daren Cole faces a late fitness test after an injury suffered against Dundalk.

Meanwhile, Devine has paid tribute to his players for the way they have handled themselves over a season that has been far from usual.

“You work on your team spirit, your group activities, to gel the group as quickly as possible,” he said. “We have players who have really abided to every Covid rule; they are living in bubbles of three or four people, they are away from home and away from families. It’s very, very difficult so I have to give the players huge credit, the way they have managed their bubbles individually and collectively.”