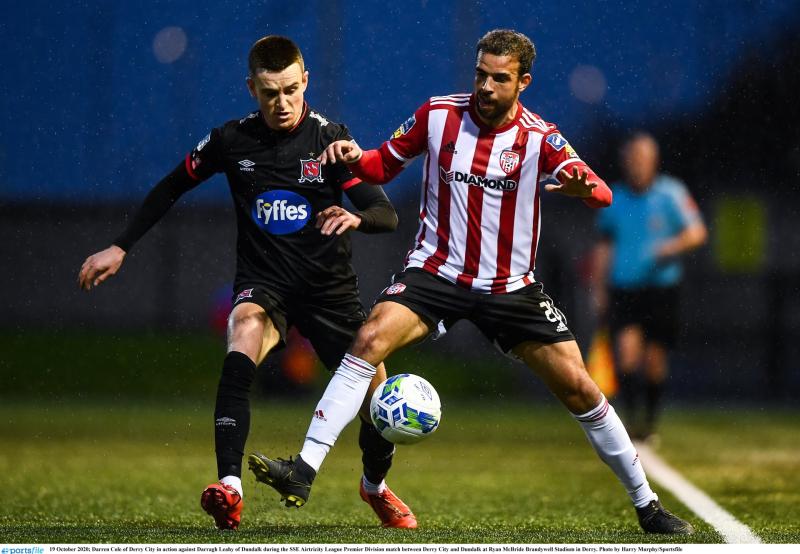 Darren Cole was on the scoresheet against Dundalk.

Derry City fell just short against Dundalk again after a disastrous opening to the game ensured the usual frustration against the champions.

The Candystripes were two goals down within 14 minutes and despite fighting back, they gave themselves too much to do, despite a brave effort in horribly torrential conditions at the Brandywell.

It took just seven minutes for Dundalk to open the scoring on Monday evening and there was little that Peter Cherrie could do about a fabulous strike from Sean Murray. Former City midfielder Greg Sloggett, on his first game at the Brandywell since leaving the club, was responsible for the goal, finding space just inside the City penalty area before laying the ball off for Murray who drilled the ball directly into the top corner.

There was no sign of any complacency or any weakness in this Dundalk team and the goal only buoyed them further as they continued to put Derry City onto the back foot. It could well have been 2-0 on 13 minutes when a Michael Duffy corner fell kindly for Stefan Colovic and the midfielder sent a beautiful volley goalwards, with Cherrie scrambling across his goal and relieved tat the ball just passed the upright.

Nonetheless, Dundalk were celebrating within 30 seconds as Conor Clifford got his attempted back pass to Cherrie all wrong, slicing the ball into the path of Jordan Flores who couldn’t miss as he fired past the exposed City goalkeeper.

It was a disastrous start from Derry but to their credit they hit back immediately. A free kick into the Dundalk area from Adam Hammill found Cameron McJannett whose goal bound header was stopped on the line, but Darren Cole was there to fire in the rebound to give the hosts a lifeline.

It took Derry 80 minutes to trouble McCarey and they did so twice in quick succession. Good work from McJannett saw the defender find Clifford 25 yards from goal and the midfielder took one touch to set himself before curling the ball towards the bottom corner, forcing McCarey into a good save as he tipped the ball behind at full stretch. City took the resulting corner quickly and this time it was ack Malone 25 yards out, but again McCarey was equal, pushing the ball behind for another corner.

The second corner led to an intense goalmouth scramble with City players adamant that a Dundalk player had handled, but referee Rob Harvey said no.

City continued to push late on, but they were unable to break through.