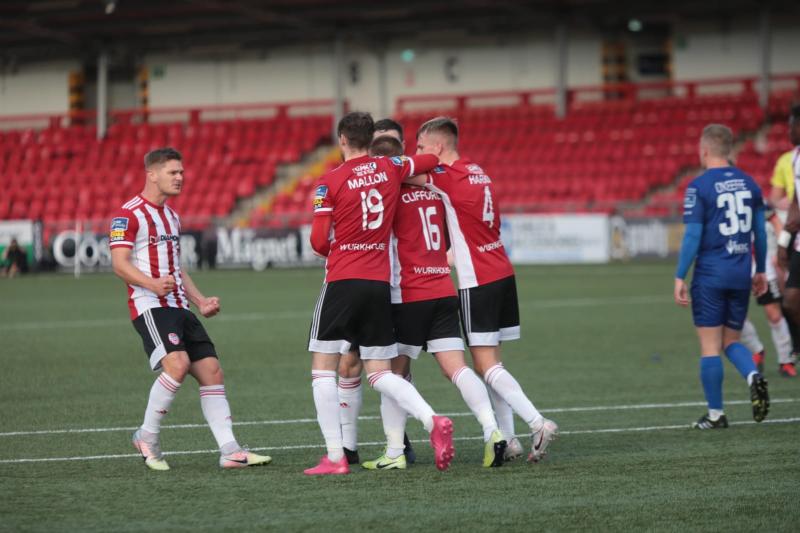 Derry City picked up a deserved win over Waterford at the Brandywell. Pic by Tom Heaney, nwpresspics

Derry City picked up an invaluable win over Waterford thanks to two Conor Clifford penalties .

After late defeats to both Bohemians and Sligo Rovers in the past week, the pressure was on City, and they responded well, picking up a win that was thoroughly deserved.

The game was slow to get going, and it was headed to a goalless half time until a real moment of controversy arrived when Olunatunmise Subowale foolishly barged into the back of Walter Figueira, and referee Rob Hennessey pointed to the penalty spot.

It looked a fortunate decision in favour of City but Conor Clifford, on his first start in 11 games, stepped up to take the spot kick and sent Brian Murphy the wrong way to send the Candystripes into the lead at the break.

City appealed for another penalty just two minutes into the second half when Conor McCormack went down in the area after a one-two with Harkin, but this time referee Hennessey said no.

Brian Murphy then kept Waterford in the game with a sensational close range stop to deny Ibrahim Meite a goal. Figueira again won a free kick, this time on the left of the area and Stephen Mallon’s low delivery was on a plate for Meite, but Murphy somehow kept it out.

Waterford were having real trouble curbing the threat of Figueira and just moments later he cut inside and drilled a brilliant effort at goal, but again Murphy was there, tipping the ball over the bar for a corner.

The Candystripes were well on top now and they got in behind again, Stephen Mallon getting to the byline where he puled it back for Figueira who side-footed wide. However, as the City man shot, he was wiped out completely by a late tackle from McCourt, and referee Hennessey again pointed to the penalty spot.

Clifford stepped up again, despite a request from Figueira, and he cheekily sent a Panenka-style penalty past Murphy to make it 2-0.