'We really need our luck to turn' 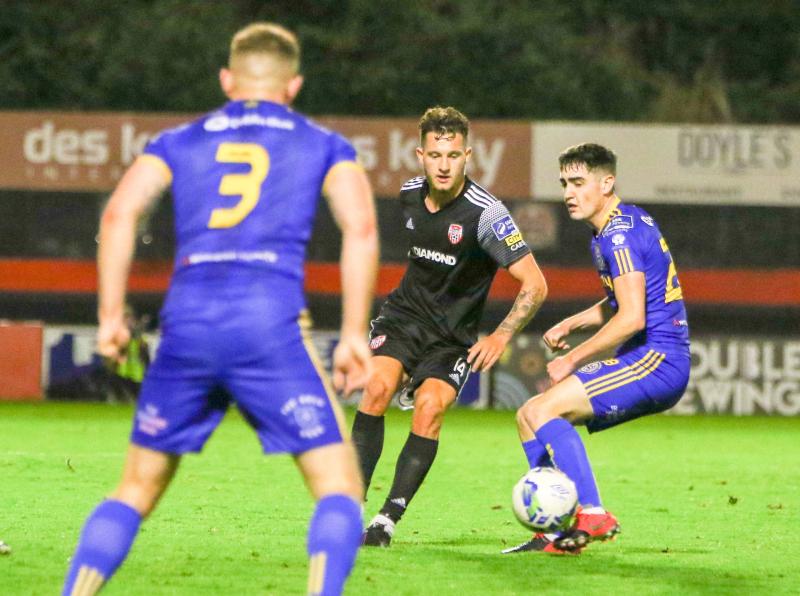 Jake Dunwoody in action against Bohemians at Dalymount Park. Pic by Kevin Moore

Jake Dunwoody is hoping that Derry City’s luck will finally turn at Sligo Rovers tomorrow night, with he and his team mates determined to hit back following the devastation at Dalymount Park.

The Candystripes looked to have beaten Bohemians thanks to James Akintunde’s first half goal, but they threw the game away in stoppage time, conceding two late goals in what could prove to be a defining point in this season.

Declan Devine’s side are now looking over their shoulders at the wrong end of the table following the Bohs’ defeat, which dropped them down into seventh place in the Premier Division. It could all have been so different had Derry hung on for the win, but instead of moving just one point behind Dundalk and European places, City now have to worry about the likes of Finn Harps, Shelbourne and Cork City.

“It’s a blow really because that was one of the better performances that we’ve had in recent weeks,” Dunwoody said. “Off the ball I thought we were brilliant, but to lose the game at the end, everyone’s hurting.

“The way the game was going, they were putting a lot of pressure on us. Looking back on it I don’t think it was even in the box. It is what it is. Even though they scored we should deal with the cross for the second goal, but that’s just the way our luck is going at the moment.”

After failing to impress against Harps and St. Patrick’s Athletic in recent games, Friday’s display was very nearly the perfect away performance, with City comfortable until those final few minutes.

“We were comfortable the whole game,” Dunwoody agreed.

“We went in at half time and just said to keep doing what we were doing. They were obviously going to come back at us, but I think we rode the storm for quite a while, still dominated the game and still had chances. We just needed that second goal just to kill the game off, but we just didn’t get it.”

Dunwoody, who turned 22 today, is now glad that City are back in action again so quickly, with tomorrow’s game against Sligo Rovers brought forward due to potential international call-ups. European football is still not out of the question and two good results this week could change the picture again entirely. Tomorrow’s opponents Sligo will be thinking the exact same thing however, and hoping to repeat the victory they enjoyed at the Brandywell back in August.

Dunwoody however, is hoping that the Bohs defeat could yet be a blessing in disguise for a group of players who now have a point to prove after Friday’s defeat.

“It’s good because we don’t have to wait too long until the next game,” he explained. “We can just go there on Tuesday and hopefully go there with the mindset of winning the game.

“We just need a run of form. We have been keeping a lot of clean sheets, that was the first time we conceded for quite a while, and I thought we were well on top in the game.

“To have a game Tuesday is good so hopefully we can beat Sligo and we’ll be back up and running. We just need to get a bit of luck on our side. Everyone did well against Bohs and everyone dug in, we did the dirty stuff well, second balls, everything, but we just got killed at the end.”