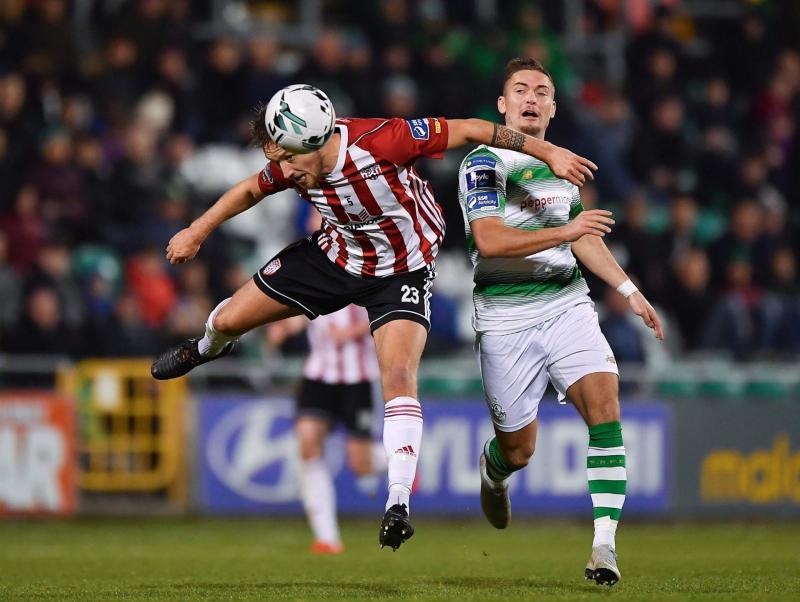 Ally Gilchrist has revealed that while he is ahead of schedule in his recovery from a fractured ankle, he has no idea when, or if, he will play again this season.
The 25-year old has been out of action since August 13 when he suffered a fractured ankle in training and has missed league games against Shelbourne, Cork City, Finn Harps and St. Patrick’s Athletic as well as the Europa League tie against FK Riteriai and the FAI Cup clash at Drogheda United.
It is the first time that Gilchrist has suffered a long term injury whilst with the Candystripes, having missed just two of the previous 29 games in all competitions, and he explained that a ‘freak accident’ in training was to blame.
“I think it was two days before the Shels game, it was just a nick off the ball and someone caught me on the side of the ankle and I went down,” he recalled.
“I thought maybe that it was just an impact kind of kick. I went off the pitch and the physio had a look at me and I didn’t look too bad but then, after watching the rest of the session, I went to walk and I couldn’t put any weight on it. I went and got an x-ray and it came back a fractured ankle which I didn’t expect at the time.”
The timing of the injury was unfortunate for both the player and manager Declan Devine, with football having just resumed after a five-month break due to Covid-19. Whilst his team mates have been kept busy on the pitch since, Gilchrist has had to do with watching from the stands.
“Mentally it has been tough for me but I just need to keep the head up,” he said.
“I’ve been around for a while and I’ve had injuries before. It’s part and parcel of what happens in football. You’re itching to get back and obviously I’m buzzing for the boys and I want them to do well all the time, but obviously I really want to be out on the pitch as well.
“The Europa League situation was a nightmare as well and it was pretty bad timing for me personally. You just want to help the boys as I said. You’re itching to get out there to try and help out a bit.”
Derry City head to Bohemians today hoping for an upturn in fortunes after successive 0-0 draws with Harps and St. Pat’s, but for Gilchrist the wait continues.
“I’m still a good bit off, turning and changing direction and stuff like that,” he admitted. “I’m doing a lot of straight line stuff just now so I still haven’t done a lot of turning  but I’m progressing pretty well through the recovery. Michael Hegarty has been brilliant with me, he is really helping me along. Hopefully soon but I don’t think I’ll be involved this weekend anyway.
“I think I’m getting another x-ray to see where I’m at on Monday morning. I guess I’ll find out a lot more then but I’ve been doing a lot of running and I think I’m ahead of schedule just now so fingers crossed and touch wood that I’ll be back before the end of the season.
“I don’t think they are putting a proper time frame on it until we see on Monday what the guy says about the x-ray.”