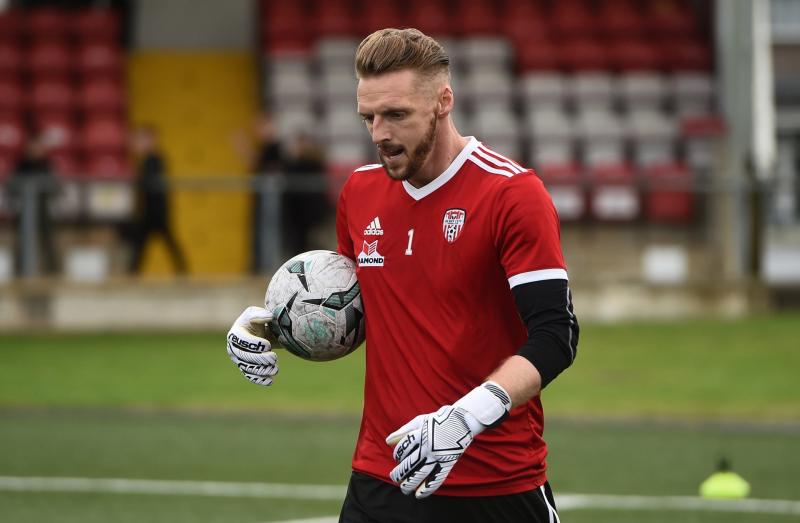 Peter Cherrie is set to make his 50th appearance for Derry City today, a number he wants to expand on into next season if the club wants him.

Cherrie, who turns 37 in just a few weeks’ time, may be in the twilight of his career, but he is in no way contemplating a life beyond football just yet, insisting he has more than a few years left. Whether those years will be with Derry City remains to be seen. Cherrie’s contract is up for renewal at the end of the current campaign, and after almost two years at the Brandywell, he admits to being very open to remaining a Candystripe.

“My future hasn’t changed over the past few years,” he said.

“I still feel good, and I still feel as if I can do a job. Who knows at the end of the season? If the club wants to sit and talk to me, I’m always open to that, no problems. I still feel good, I still work hard, I work hard every single day. It’s not as if I get any special treatment because I’m older or I get days off here or there. I train just as hard as anybody, so come the end of the season, I’m always open – I’ll play on regardless. If the club wants me, it’s not a problem.”

Cherrie is the most experienced player in Declan Devine’s squad, and while the career of a goalkeeper usually long outlasts that of an outfield player, he is not willing to take it easy with his ambitions as high as ever.

“If I don’t have these ambitions I may just give up,” he explained.

“There is no point in keeping going if you don’t have the ambitions. We’re still in the cup so I want to go all the way as do the rest of the boys. I would love to make Europe again. I would love to play in Europe again, of course I would. My ambitions don’t change. I treat every single day as if it could be my last, because I know I’m getting older. The body is not showing that. That day will come eventually, but it ain’t coming anytime soon.

Cherrie remains upbeat about Derry City’s chances of success this season, and insists that there is still time to turn things around, with European qualification and the FAI Cup still very much there to grasp for the team.

“We’re still in the cup and we still can get Europe so it’s just about getting our mindset right and saying ‘Okay, we haven’t had the greatest of starts but we’re still in the cup, Europe is up for grabs, so let’s just go and kickstart our season, let’s get a win under our belts, and get the confidence to go and kick on and see where it takes us.”

First and foremost, Derry City need to get back to winning ways against St. Patrick’s Athletic this evening at the Brandywell, with a win having the potential to send Devine’s team right back into the mix at the top end of the table. Defeat against the Dubliners however, could see them plummet in the opposite direction.

“That’s the thing, the league is wide open this year,” Cherrie agreed.

“Okay, Rovers are eight points clear I think at the top, but apart from that, a team at the bottom gets a win and they shoot three or four places up the table. That’s no different for us as well because if we get a win then we will shoot right up that table. It’s just getting that wee win, getting a bit of confidence and hopefully kicking on and getting five or six wins under our belts.”