'Our attacking players never came to the party' 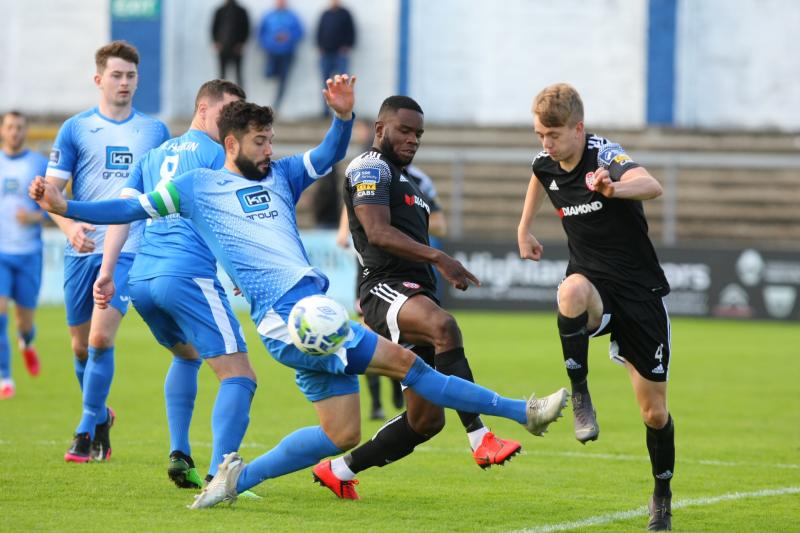 Declan Devine has labelled Derry City's performance against Finn Harps as 'not acceptable', after the Candystripes could only manage a point in a drab 0-0 at Ballybofey.

City were toothless in attack through and had to rely on Peter Cherrie at the other end, as they failed to spark on the Finn Park pitch.

"It was frustrating again," he said afterwards. "We've been working very hard on our defensive qualities but tonight our attackers never came to the party. We didn't create anything. It was very disappointing. We had a lot of the ball and we were very careless with it. It was a difficult pitch, I'm not making any excuses, but it wasn't good enough from us. We'll dust ourselves down and move on to the next one.

"I'm certainly not happy with the performance. We've got to be a hell of a lot better than that, and in the end up we could have lost the game. We haven't performed on the night and we have to make sure that we're better. That's not what I'm about, that's not what the back room is about and that's certainly not going to be acceptable moving forward."

Harps may well feel that they should have bagged all three points in an absorbing, if goalless encounter.

For City, this draw moves them up to sixth spot, above Shelbourne and St. Patrick’s Athletic on goal difference.

After a cagey opening it was Derry who posed the first real threat on 11 minutes when Walter Figueira carved out some space to get in a shot from 20 yards but Dave Webster, deployed in a centre-half role, did well to block the effort and the danger was averted for the home side.

And Figuueria was then involved in the best attack of the first quarter as he whipped in a cracking cross from the left but the probing Oluwaseum Akintunde was unable to meet with the telling connection in front of goal.

Harps conjured up their first real chance of note on 31 minutes when Karl O’Sullivan sent in a decent ball from the right and Austrian forward Alexander Kogler headed not far past the post.

This lifted Harps and shortly afterwards City lost possession in their own half and nearly paid the price as Kogler surged into the box but just as he was about to shoot, Eoin Toal made a great last ditch tackle.

Figueria had another chance for Derry on 35 minutes but could only fire wide in a game that was swinging from end to end.

The visitors finished the second half as the stronger side as Harps had to withstand some pressure that saw a couple of goalmouth scrambles.

City gave Harps a worrying moment after the interval when Akintunde curled a free just outside the target while at the other end Peter Cherrie redeemed himself with a good stop from Kogler following a wayward clearance.

The Candystripes then had a real scare on 52 minutes when Cherrie failed to hold a cross and Stephen Folan rose to meet the loose ball from close range but it was cleared off the line by Darren Cole.

Mark Russell then spurned a good chance for Harps on 70 minutes as the Donegal club enjoyed a good spell with the Derry defence struggling at times.

Harps netminder Mark Anthony McGInley was fortunate to get away with a poor clearance that cannoned off Ciaron Harkin on 86 minutes,but he was able to get back and gather the looping ball.

Next up for City is a home game against St. Patrick’s Athletic while Harps are now away to Shelbourne.