Eighth place Derry hoping to move back into European contention 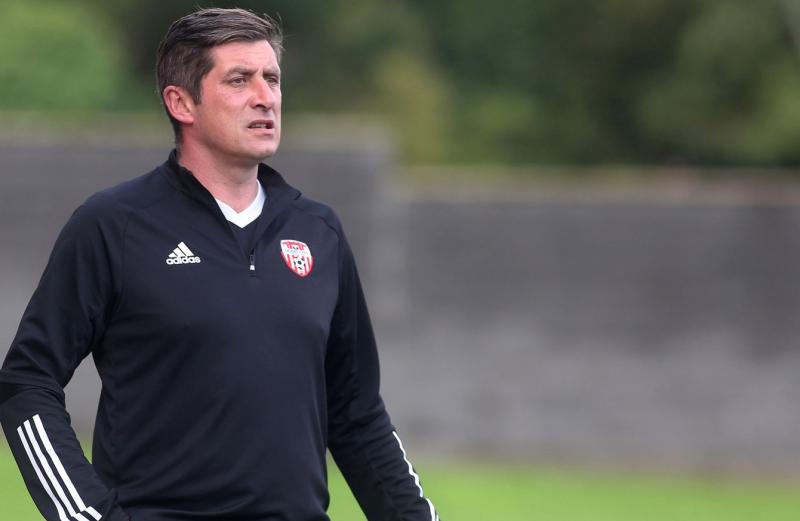 Declan Devine is preparing for an onslaught at Finn Harps today, but has backed his players to give as good as they get in Ballybofey.
The City boss was in Sligo on Monday past to see a Harps loss which keeps them bottom of the Premier Division. On top of that they had two players and manager Ollie Horgan sent off, but despite Harps' current problems, Devine is expecting a severe test of his team come Sunday.
“They are very difficult to play against,” he said. “They have a lot of aerial threat throughout the team and are one of the biggest teams in the League of Ireland.
“They have nine goals this calendar year from long throw-ins and they have a very direct style of play but they also have players who are very technically gifted. They have invested heavily in the squad this year and we are under no illusions going to Ballybofey.
“I've been involved with the league for 20 years and I've never ever known a Northwest derby to be taken lightly. You have to be extremely focused and extremely determined and be prepared to deal with the onslaught that's going to come your way at times. We have to stand up to that.
Devine admits it will be strange to play in a derby game with no atmosphere, but understands it is yet another challenge to stand up to in a 'ridiculous' football season.
“One thing we're not going to face is a hostile atmosphere which we usually deal with in Ballybofey and that's going to be very strange, but we're under no illusions, it's going to be a very aggressive game,” he said.
“We're going to have to deal with a lot of physicality but at the same time we'll have to  stamp our authority on the game and play to our strengths and hopefully that will be enough to get a favourable result from the game.
“Football at the minute is just ridiculous. There's very little enjoyment in football at the minute when you're not playing in front of your supporters, but it's important to win games for the supporters who are watching at home.”