'Winning it will mean more to us this time around' 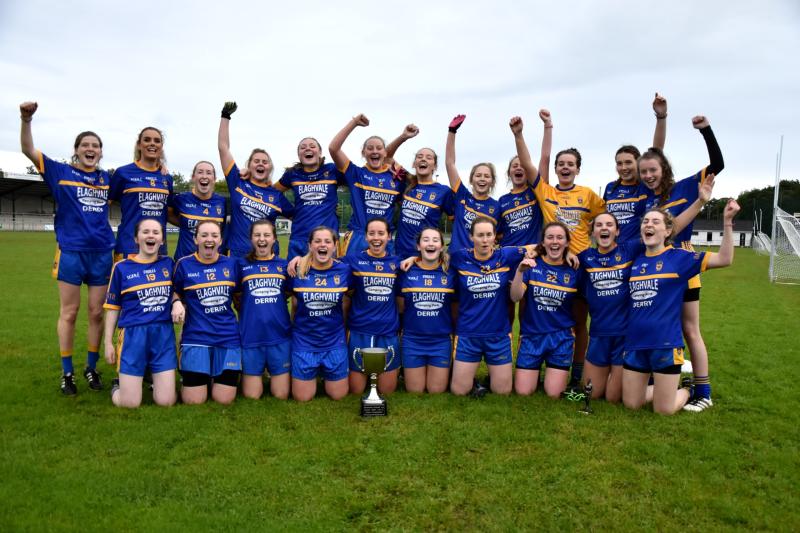 Winning the senior championship this year would mean that little bit extra to Steelstown who are hoping to forget three years of hurt when they meet Ballymaguigan at Celtic Park today. Throw in 4:30pm.
Since winning the trophy back in 2017, Steelstown have come close, but not close enough, to regaining the title, and the pain of every defeat on the way has haunted those players who know exactly how it feels to win a senior final.
Girls like Ciara McGurk, Emma Doherty, Aoife McGough and Katy Holly to name a few, have all been there through the highs and lows which have followed Steelstown. After the joy of victory in 2017 came the pain of defeat in the final just twelve months later to Ballinascreen, the team they had rolled over when they won the trophy.
Last year they aimed to put things right, but surprisingly lost to Ballymaguigan in the semi-finals. That wasn’t the plan, but as often happens in sport, a shot at redemption has come around in a year when few, if any, thought there would even be a senior championship final to contend.
That fact in itself is enough to make this today’s final extra special in the eyes of Steelstown joint captain McGurk.
“I think it would mean even more, because we weren’t allowed to play for so long this year,” she explained.
“It’s so good to get back now and it will be exciting that we are in the final because it gives us all something to look forward to. If you look back towards the start of the year, we never thought we would get playing any football, so to get to the final is brilliant.”
Steelstown reached this year’s showpiece after defeating Glen 3-12 to 0-6 in the semi-final, thanks in part to three goals from Leah McGonagle. Meanwhile, last year's runners-up Ballymaguigan were 1-12 to 0-7 winners over Ballinascreen, who were going for their third title in a row. It looked a comprehensive victory on the day for Steelstown, but McGurk insisted that the result did not show how difficult the game actually was.
“Glen put it up to us and it was a good, hard fought game,” she said. “We took our chances when they were there to take. We were ahead at half time but they kept going right to the end and we were the same and thankfully we were the better team on the day.
“Our defence was brilliant throughout the game. They played well, they got the ball out, our passing was good, and our forward line was brilliant. We just all gelled on the day and everything went well, but we had to work hard for it.”

Experience
There is no shortage of experience in tis Steelstown team, with 13 of the squad that won in 2017 still there today. McGurk herself has an endless catalogue of big games under her belt, with both her club and her county, but she admits that even now she gets nervous.
“No matter what kind of game, be it a friendly or a league game or the Championship I get nervous,” she continued. “Obviously with big games like this there are different kinds of nerves, but nerves are good and I always say that to the girls.
“It’s always good to have nerves, just so long as you don’t let them get the better of you. You use those nerves when you’re on the pitch to drive you forward and drive you towards the end goal.”
Nerves, experience, hurt and ambition will all come together this Sunday in what is sure to be an intense day at Celtic Park, and McGurk and her team mates, driven on by the management team of Thomas Cusack, James McGurk and Seb Crudden, are determined that it ends in success.
“Ballymaguigan beat us last year in the semi-finals and it was one of those results that was hard to let go of,” she explained.  “We never expected to be put out and we really wanted to get to the final, so we will definitely be working hard this week to make sure we don’t have that feeling again and hopefully we can come out on top.
“I know how it feels to win it, and I know how it feels to lose it. Getting put out in the semi-final last year really hurt which will help the more experienced players drive on the younger players in the team so that they don’t suffer the way we did.
“We don’t want to suffer again this year. We want to go out there and give our best and make sure that we have no regrets.”
STEELSTOWN SQUAD:
Emma Donnelly, Emma Doherty, Clodagh Laverty, Rachel Roberts, Blanaid Doherty, Kathryn Canavan, Orla McGough, Orla McGeough, Eimear McAuly, Niamh Gilmore, Niamh Rankin, Gemma Doherty, Zoe Green, Sarah McLaughlin, Lea Casey, Sarah Kelly, Kate Gallagher, Beth Heaney, Ruagin Doherty, Molly McBride, Aoife McGough, Katie Henderson, Ella Rose Sainsbury, Leah McMonagle, Laura Henderson, Ellen McFadden, Ciara McGurk, Saoirse Duggan, Enya Doherty, Aoife Collins, Katy Holly, Sarah Doherty, Maeve Mooney, Cliodhna Nelis, Niamh Friel.