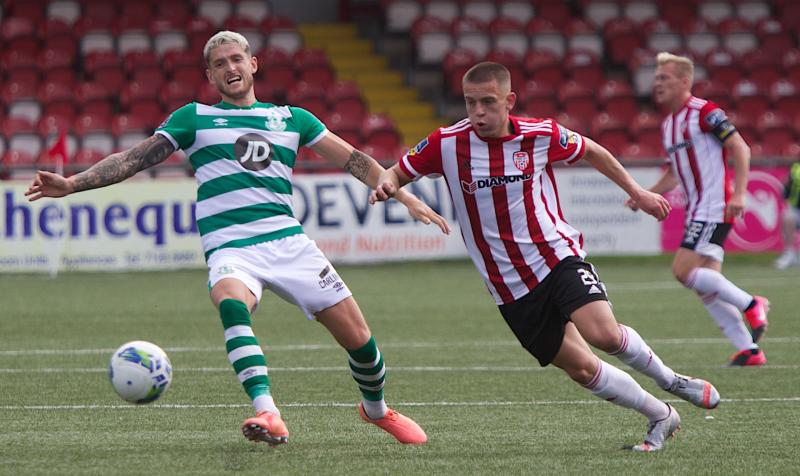 Jack Malone's return to the team could not have come at a better time for the 20-year-old who is eager to play a part against Finn Harps tomorrow, a game that is amongst the biggest of the season for the Candystripes.
Harps may sit bottom after their defeat at Sligo on Monday past, but in recent seasons they have proved a significant obstacle for Derry, particularly at Finn Park.
“For our fans, it's probably one of the biggest games in the calendar season,” Malone admitted. “To play down there it's never easy – it's notoriously hard down there. “We're  just trying to tell the boys that don't know just how hard they are to play against. For me, I'm buzzing to get going on Sunday. The whole week is based on Finn Harps so I can't wait to play now.”

City lost on their last visit to Finn Park and only scraped a draw thanks to a last gasp equaliser from Adam Liddle at the Brandywell earlier this season. Whatever Harps' circumstances of late, they usually find another gear when it comes to facing their old rivals.
“Every time we play Finn Harps, they always do well against us,” Malone agreed.
“It's a cup final for them and they have nothing to lose and although they are at the bottom of the table they are actually playing alright.
“I watched the game the other night and they were actually decent against Sligo; they were very good for 60 minutes, so we can't take nothing for granted. They always put up a good battle when they play us.
“If we beat Harps on Sunday we move into third or fourth place. The league is so tight at the minute. There is no team safe and everyone is looking for points. Every point we get is vital and we'll just keep trying to get three points in every game.”
Malone has nine appearances in all competitions this season, and is quickly becoming a regular under Declan Devine, but he is still eager to add to the one goal he has scored for the club at senior level. He would gladly take one against Harps this weekend.
“I've had one or two assists since we came back but I need to add more assists and goals and I know that will come with the more games that I get,” he said.
“I'm still learning the league, I'm still young so I'm still figuring out how it all works but the goals will come hopefully. I've picked up a few knocks but hopefully I can play as many games as I can between now and the end of the season.”