Candystripes hoping to 'make some noise' this season 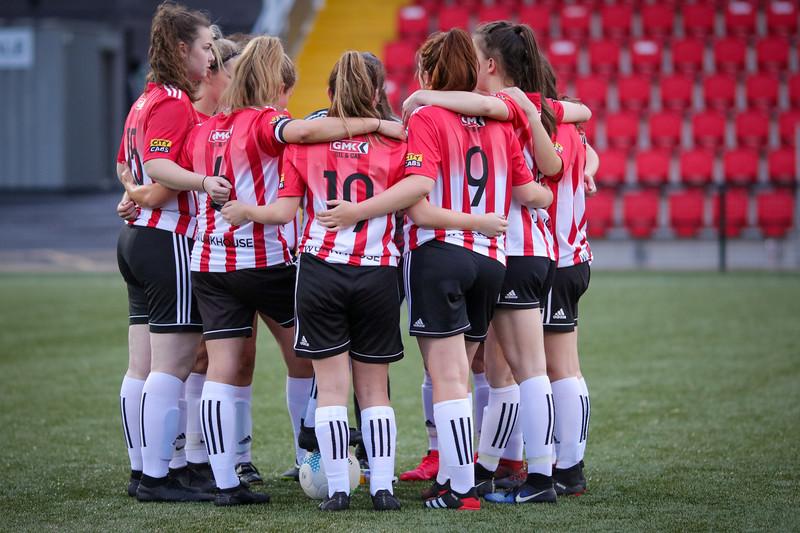 Derry City Women are back in action. Pic by JP McGinley.

Towards the end of last week's game against Sion Swifts, Naomi McMullan bravely threw herself into a tackle, winning the ball but hurting herself in the process. The yells of delight at the tackle and the calls of support as she picked herself up were the perfect examples of the spirit in this Derry City Women's team as they enter a new season.
That tackle came with the Candystripes 6-0 down against title hopefuls Sion Swifts, but rather than disappear into themselves as would be natural, the circumstances only served to fire the girls' enthusiasm, as they began to show what they were really about.
The first half was a disappointment but no great surprise, a Sion team with loftier goals taking advantage of an opponent finding its feet with a whole host of new players. Sion will likely go on and win the league title, but for Derry City Women it's about building a foundation, and last Wednesday showed the first signs of that at the Ryan McBride Brandywell Stadium.
Four goals down at the break, the girls were re-organised by manager Kevin McLaughlin, who watched on as his team showed the hunger, the discipline and the enthusiasm he wanted to see. The only obstacle in that second period was physical tiredness, but even that was challenged by the improved mentality of the girls, with McMullan's tackle just one moment of passion and drive shown by those in red and white. The result did not go their way, but there was pride and encouragement for the girls at the full-time whistle.
“I think from a tactical point of view and a coaching point of view in the second half, it was what I wanted to see,” McLaughlin said afterwards.
“We have made so many signings that in the first half, off the top of my head, I think we had only three players who played last season. It was always going to be a bit scatterbrain if you like. Because there weren't disciplined in the first half, they had to do a lot of running and that actually tired them out for the second.
“But you could see than in the second half that they were playing with discipline, they were playing their shape and we limited Sion to opportunities to mainly corner kicks, I know they scored at the end, that was probably due to tiredness, but they couldn't open us up in open play. That was brilliant from our point of view, because whoever finishes ahead of Sion this season is probably going to win the league.”
As with most football leagues around the world, the Coronavirus pandemic has led to adjustments and the Danske Bank Premiership is no exception, the season starting at the end of August and finishing in just a matter of weeks at the start of November.
Any football is better than no football however with the few games that there are providing the opportunity for the new players to settle into life as Derry City players.
“We definitely have a stronger side this year, and the fact is, because of the restrictions there will only be ten games and no relegation, which is great also,” McLaughlin continued.
“That doesn't mean that we take it easy because we still want to finish as high as we can. This was a litmus test against the best team in the league.
“We can look at the second-half performance and take heart from that and see where we go, but I would like to put some points on the board and make some noise this season.
“You could use this game as an analogy of the season. We still need to test the waters. Because they are all new coming in, we don't really know where we are going to land in this league.
“The last two seasons we have just avoided relegation and we have stayed up which was great so we're establishing ourselves in the Premier League instead of yo-yo-ing up and down so that's great.”