It's the late, late show for Derry City at United Park

Late goals send Candystripes into quarterfinals of the FAI Cup 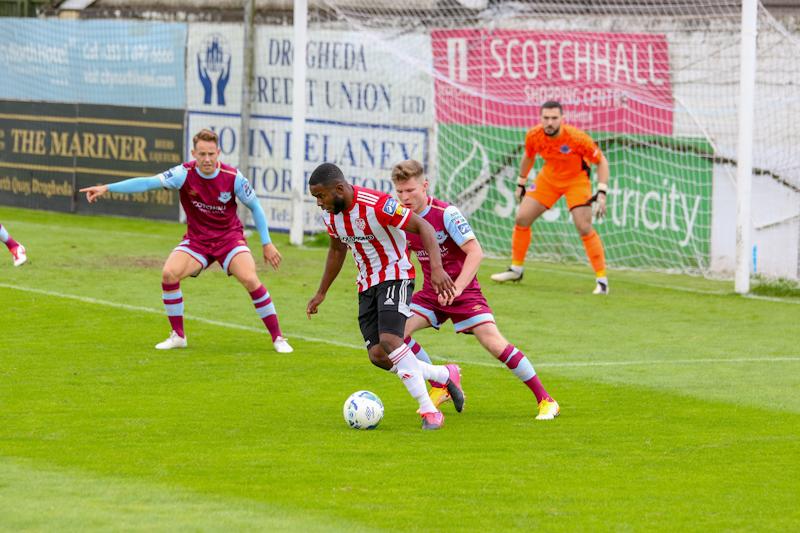 Two goals in the last five minutes at United Park sent Derry City into the quarterfinals of the FAI Cup past a stunned Drogheda.

At the end of a dire game of football, substitute Ciaron Harkin latched onto a cross from Colm Horgan to volley City into the lead with just one minute left on the clock.

A clearly dispirited Drogheda then conceded a second in added time as another substitute, this time Stephen Mallon, fired in a second goal to flatter Derry, who responded to their Europa League exit with a valuable win.

In a game of few chances, Drogheda were on the front foot early on, showing a lot of energy and enterprise as they did not take Derry settle into the game at all. The home side could well have been celebrating an early goal. Darren Cole gave the ball away down the right and Drogheda countered, with Kane working his way in from the left, and he got a sight of goal only to blaze his effort high and wide without testing Peter Cherrie.

It took Derry 37 minutes to finally threaten the Drogheda goal, and it all came from another brilliant surging run forward from Eoin Toal, this time down the right-wing. Toal’s cross from the right won City the first of two successive corners, the latter of which saw Ada, Hammill cross brilliantly to Cameron McJannett who somehow headed over from under the crossbar when it seemed he must surely score on his debut.

City were on the front foot immediately at the start of the second period and Ibrahim Meite, after a quiet first period, went for a spectacular effort almost immediately, his left-footed effort from the edge of the area curling wide of goal without testing Ross Treacy.

The visitors were asking the questions at the start of the second half but a Drogheda break, led by Mark Doyle, saw the home side very nearly take the lead. Doyle went on a mazy run through midfield right to the edge of the City penalty area, where his attempted shot was blocked. The ball however ran straight to Brandon Bermingham who tried a low first-time effort which had Cherrie scrambling across goal but it went just wide of the target.

The game was heading to extra time before one decisive moment decided it – Colm Horgan breaking into the area and crossing for Harkin to fire in a fantastic finish at the near post with just 60 seconds left on the clock.

There was still time for another goal to really flatter Derry as Meite’s threaded pass put Mallon through on goal and he smashed in his third goal of the season to send the Candystripes through to the quarterfinals.