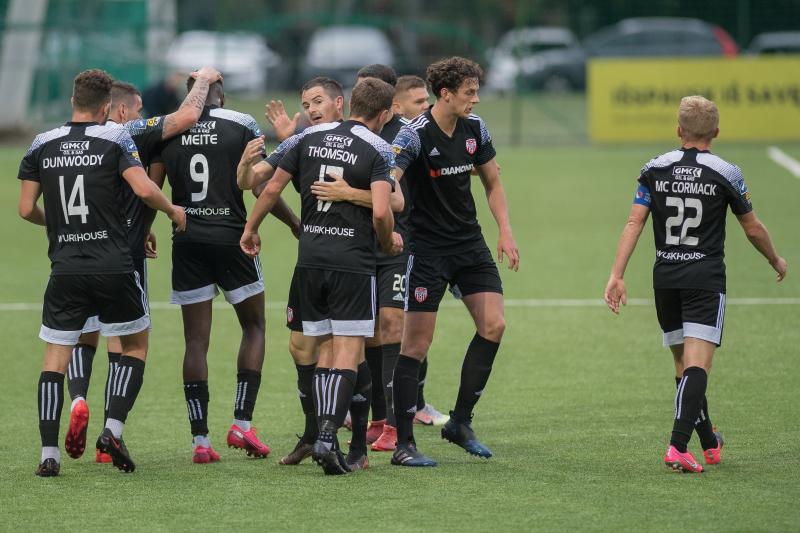 Derry City’s Europa League campaign has ended at the first stage after they lost out in extra time against FK Riteriai in Vilnius tonight.

Derry City took a deserved lead within 18 minutes when a ball into the penalty area by Ciaran Coll was brilliantly controlled on the turn by Ibrahim Meite who directed it into the path of the supporting JoeThomson, who took the ball down and placed it into the bottom corner of the net from 15 yards for his first goal for the club.

As the half progressed, City began getting sloppy in possession, which only encouraged the hosts, who worked out an equaliser just six minutes before half time. Kazlauskas was sent chasing down the right wing and he managed to get his cross in towards the near post where Gytis Paulauskas met it with a powerful header which flew past Cherrie and into the net to level the tie.

The second half began disastrously for Derry who conceded from the most simple of set plays, an Achilles heel for the Candystripes through the entirety of this season.

Joe Thomson conceded a free kick, allowing Riteriai to crowd the penalty area and when Mindaugus Grigaravicius swept the cross in Gytis Paulauskas was unmarked to head in his second goal of the game.

The rain continued to last down in Vilnius in what was becoming a real European thriller, with City equalising just past the hour mark. Adam Hammill took a short corner to Akintunde inside the area, and when the winger got the ball back, he shifted it onto his right foot before swinging a cross deep into the area where Eoin Toal rose highest to head the ball into the net to level the game for the visitors.

Derry City were dominant in the closing stages and looked like the only team likely to score. The goal almost came when a quick corner caught the Riteriai defence sleeping, but Akintunde’s shot was deflected over the bar by a last gasp tackle.

Declan Devine did his best to rally his troops before extra time started, but his words were not heeded by his players as they conceded less than 30 seconds into the restart. Donatas Kazlauskas raced towards goal and with no challenge incoming from Colm Horgan, he simply curled the ball over Cherrie who was too far off his line, and Derry were out of Europe.