CAN WE DO IT AGAIN? Take a look back at some of Derry City's greatest European moments. 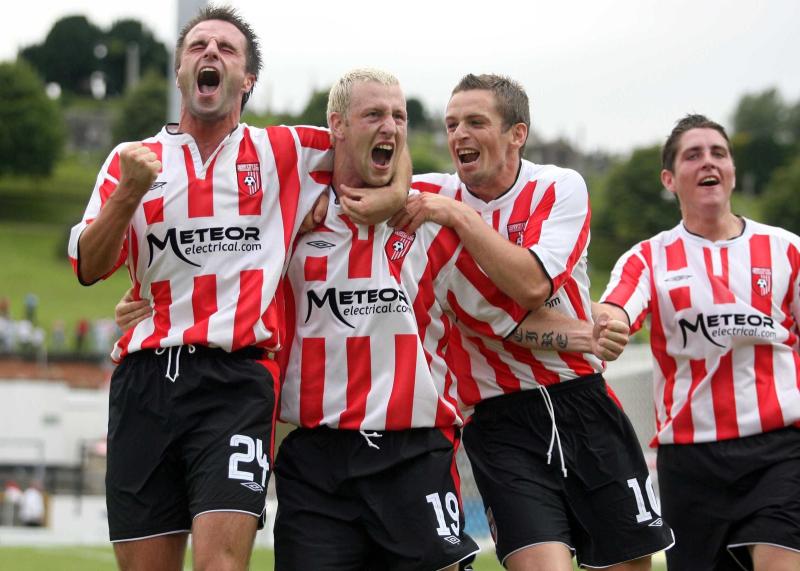 Derry City have enjoyed some fantastic moments in European competition

As Derry City prepare to face FK Riteriai in Vilnius tonight, fans will be hoping for another memorable European win.

There have been some fantastic European adventures at the club over the years and ahead of this season’s Europa League adventure, we look back on some of the biggest nights in Derry City history.

The city came to a standstill on Wednesday, September 13 as Benfica, one of the true European powerhouses, arrived at the Brandywell, with Portugues legend Eusebio in tow.

Derry City held their own for an hour but the class of Benfica shone through as they opened the scoring. Benfica substitute Vata got down the wing and crossed and although Vaudequin headed clear, the ball came to Swedish international Jonas Thern, who took a touch before driving the ball across the face of goal and past Tim Dalton into the corner from 25 yards.

Just five minutes later Benfica doubled their lead. Paniera’s corner caused pandemonium in the City penalty area and although Aldair’s shot was blocked, the loose ball came to Ricardo, whose shot beat Dalton, only to be headed off the line by Kevin Brady. The referee’s assistant raised his flag and signalled that the ball had crossed the line and referee Guy Goethals awarded the goal.

Derry City were now up against it but on 74 minutes the Brandywell was brought back to life. Liam Coyle’s through ball sent Felix Healy in behind the Benfica defence and his left-footed shot across goal beat Silvinho, only to bounce back off the base of the post.

Fortunately for Derry, the loose ball ran into the path of Paul Carlyle, who kept his composure to drill the ball into the vacant goal from 18 yards. The fans exploded into life. Derry City were back in the tie.

For all their efforts though, McLaughlin’s team could not get the equaliser in the closing stages, but their showing against one of the strongest teams in Europe was not lost on their supporters, who gave them a standing ovation after the game.

Felix Healy’s Derry City side were expected to be second best in their Cup Winners’ Cup tie against Lokomotiv Sofia, the full-timers from Bulgaria.

Those fortunate to bag a ticket for the game were to witness a truly historic day at the Brandywell as Derry finally got their first European win as a League of Ireland team. .

The only goal of the game came just before half time when Sofia goalkeeper Ruman Apostolev misjudged a cross from Harry McCourt and the ball flicked off the underside of the crossbar before being cleared. However, the linesman signalled that the ball had crossed the line, and much to the dismay of the visitors, the goal was awarded.

McCourt’s goal proved to be enough and the final whistle brought memorable scenes at the Brandywell, with a whole generation of City fans seeing their team victorious in European competition for the first time.

Just two days after facing Barcelona at the Brandywell, the Candy Stripes were in Cyprus for their UEFA Cup tie against Apoel Nicosia and it proved to be a significant occasion as Derry City finally hit an away goal in a European tie.

It had taken almost 20 years for the Brandywell club to achieve such a feat, with games against Cardiff City, Benfica, Vitesse Arnhem, Lokomotiv Sofia and Maribor all drawing a blank. The right man in the right place proved to be none other than Gary Beckett, who scored on the stroke of half time to cancel out Wojciech Kowlczyk’s earlier effort.

Nicosia went on to win the game 2-1 thanks to Stelios Okkarides’ second half strike, but the crucial away goal meant that Dermot Keely’s side were still in with a chance of progression ahead of the home tie at the Brandywell.

The great result in the club’s history?

Every Derry City fan will be able to say where they were and what they doing when news filtered through from Sweden that the Candy Stripes had beaten IFK Gothenburg on their own patch. For those lucky enough to be in attendance at the Ullevi Stadium, it was scarcely believable and tales of the celebrations which followed the final whistle became as legendary as Sean Hargan’s winning goal.

The game was still in the balance until the 80th minute when Derry ventured forward and won a corner. In a moment never to be forgotten by the small number of Derry City fans in attendance, Kevin Deery floated a corner into the penalty area where Sean Hargan jumped highest to send the ball back across goal and into the net. It was an unstoppable header.

With time running out, goalkeeper David Forde produced arguably his two best saves in a Derry City shirt, two world class saves in the space of a minute to keep Gothenburg at bay.

Another amazing result, another amazing night for Derry City as 3000 Candystripes packed into Motherwell’s Fir Park to watch a demolition.

It all went to plan for Gretna in the opening stages of the game and a nervy start from the Candy Stripes was punished when they fell behind as Ryan McGuffie scored after just eight minutes.

Midway through the first half, things started to go wrong for the hosts as Derry City equalised, Darren Kelly meeting the ball with a firm header, sending it into the net to level the tie with a vital away goal.

The teams remained level at half time, but Derry City were out again quickly, and in one of the most stunning halves in the club’s history, they blew Gretna away with an incredible display of attacking football.

Two brilliant goals from Kevin Deery, including a blistering 30-yard free kick, put City in control but there was still ore to come.

Derry took advantage of a stunned Gretna, Ciaran Martyn scoring two brilliant individual goals, right in front of the City fans, who were in dreamland.

September 14 was a huge date in the history of Derry City Football Club as the mighty Paris St. Germain arrived at the Brandywell to great fanfare.

The game itself produced another valiant performance from the Candy Stripes, as they showed respect, but no fear, to their glamourous opponents.

Twice in the opening stages Killian Brennan came close, shooting just wide before sending a magnificent shot from 25 yards onto the crossbar. But as the game went on, the French side began to settle and Brennan had to be a hero at the other end as he cleared the ball off the line after Fabrice Pancrate’s header had beaten David Forde. Darren Kelly then cleared the ball off the line a second time as PSG took control and Derry were glad to survive until half time.

Perhaps the game’s defining moment came just after the break when Kevin McHugh broke into the PSG penalty area and was brought down. Everyone in red and white screamed for a penalty but Slovakian referee Richard Havrilla said no.

It wasn’t to be, but a 0-0 draw kept Derry in with a fighting chance ahead of the second leg in Paris.

Derry City produced arguably their best performance of the 2014 season, as they hit five in a Europeaan away game for the second time in 8 years.

Leading 4-0 from the first leg, City showed no mercy. They cruised into a 2-0 lead within 15 minutes. Headed goals from Michael Duffy and Barry McNamee ended the tie as a contest but City were far from finished.

A second half hat trick from Rory Patterson, the third of which was a cheeky penalty dinked down the middle, secured an outstanding 5-0 win on the night, and a 9-0 victory on aggregate. The score line was also the highest ever recorded for an Irish side in European football history.