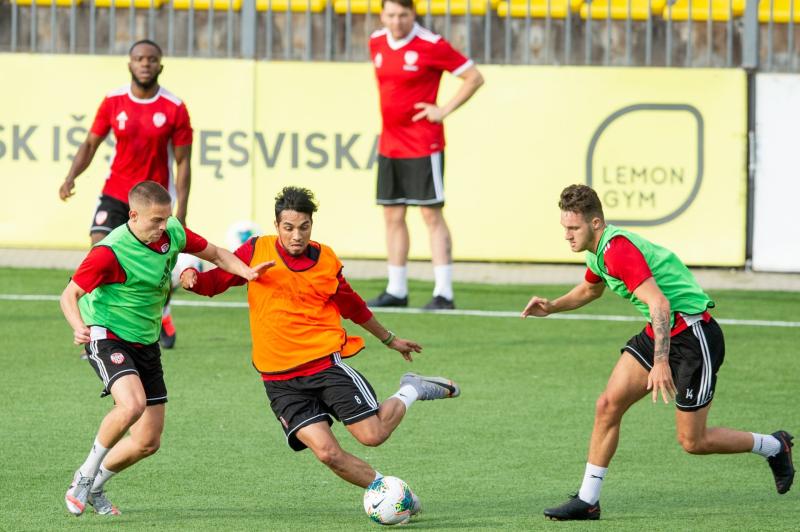 Derry City players in training ahead of his evening's Europa League tie against FK Riteriai.

Declan Devine has insisted that his players are ready as the clock ticks down towards this evening's Europa League tie with FK Riteriai in Vilnius.

The Candystripes boss and his squad left Derry yesterday and flew directly to Lithuania where they have put in place their final preparations for this evening’s game against the 'Knights', with victory meaning over £200,000 to the club.

City got back to winning ways at the weekend with a deserved 3-1 win over Cork City at the Brandywell, a victory which came at the exact right time for Devine and his team who have struggled since football resumed last month.

Devine was part of the City management team which flourished on the continent in 2006 against IFK Gothenburg, Gretna and Paris St. Germain and knows full well the joy of winning at the highest level.

“It's one of the highlights of your season and something that you reflect back on,” he said. “Some of the European ties I've been involved in, both with this club and other clubs, have been highlights and memories that live with you for a long time. When you reflect back you want to remember winning; that's the ultimate one because you want to progress through a round.

“Our recent history, barring Aberystwyth, hasn't been great. We've qualified which is a sense of achievement, but we have to try and strive to be better we have to get through a round or two and try and make sure it's a regular occurrence that we are playing in these types of games.”

Devine has dismissed any notion that FK Riteriai are there to be beaten on Tuesday, with the Lithuanians struggling badly in their domestic league. Riteriai have played 16 league games in 'A Lyga' this season, and won just one game, losing 10 in the process. Yet Devine believes that their league performance is not a fair reflection of the quality within the team.

“I've watched a lot of them, they are technically very good footballers, but we are going out to try and win a game. We have to be at our very, very best, as everyone has to be in Europe. We can't afford an off night because the stakes are so high. We want to be in this competition for more than 90 minutes so it's all about the performance on the night.

“This season has been absolutely nuts. I’ve never seen anything like in in 27 years in football.

It's not something that we really enjoy playing in front of empty stadiums, but it's a game of football, it's a 90-minute game that could potentially could go to 120 minutes and penalties. There are no excuses, we have got to perform on the night and I've every confidence the boys can do that.”