Stick a Cork in them - they're done! 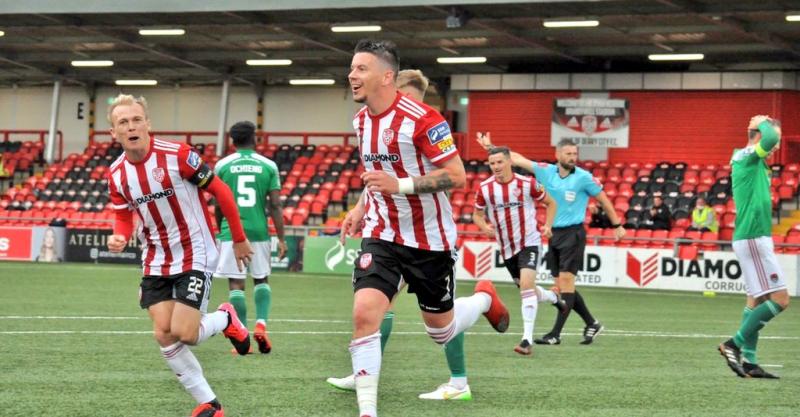 Two goals in three second-half minutes helped Derry City overturn a half time deficit to pick up a much-needed win over Cork City at the Brandywell.

Trailing to Joseph Olowu’s early goal, the Candystripes were in trouble again, but hit back strongly in the second half with goals from Walter Figueira and Adam Hamill before James Akintunde sealed the win late on.

The game started disastrously for Derry who conceded with the first attack on their goal just three minutes in, Kevin O’Connor’s high ball into a packed penalty area spilled by Peter Cherrie, allowing Joseph Olowu to capitalise, volleying the ball into the empty net to make it 1-0 to the visitors.

City were straight onto the offensive at the start of the second half two goals in three minutes turned the game on its head.

City’s persistence finally paid off on 50 minutes as they got their equaliser and it was another goalkeeper error which led to the goal. Mark McNulty was unable to hold onto a high cross from Ciaran Coll and Jack Malone did superbly to keep the opportunity alive, pulling it back for Walter Figueira to fire home, much to the relief and delight of the home side.

That relief turned to joy within two minutes as City turned the game on its head with a second goal. Again Meite was heavily involved, showing great strength and skill to hold off two Cork defenders on his way to goal. Meite seemed certain to score, but his effort was brilliantly parried by McNulty, only for the ball to roll across goal where Hammill was on hand to roll in his first goal for the club.

It took an extraordinary save from Cherrie to keep his team ahead in the last five minutes as the City goalkeeper somehow got his hand to Connor Simpson’s cross, clawing it off the goal line to save his team.

The win was sealed with the very last kick of the game as James Akintunde collected the ball off Stephen Mallon and hooked the ball into the bottom corner to give the Candystripes a very valuable win.