Striker expects to be fit for Cork City after debut injury 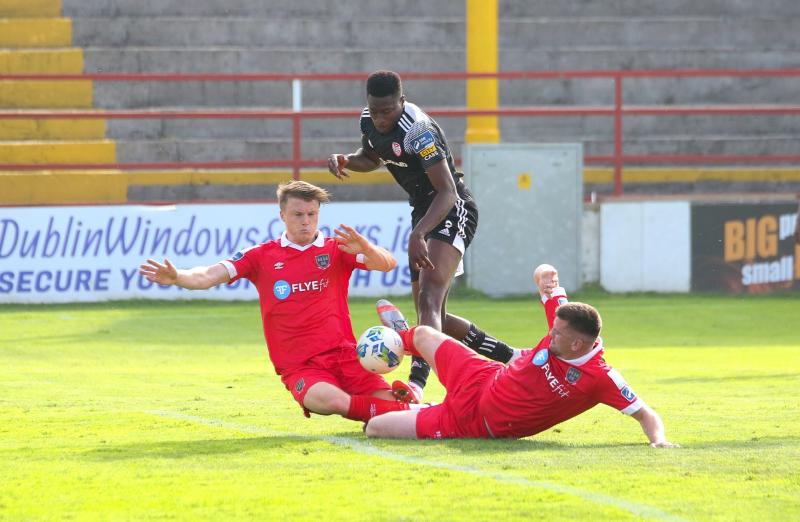 Ibrahim Meite has told Derry City fans that his best is yet to come after scoring on his debut at Shelbourne at the weekend.

The striker scored from the penalty spot before being withdrawn with a slight injury, but he believes he will be available for this weekend's game against Cork City at the Brandywell.

“I felt my quad in the first half,” he explained. “It's just not been playing for a long time, I've been in quarantine and running and stuff. Game intensity is a lot harder than running on a run or just running but I think it will be alright."

For Derry City fans, Meite's goal was a long end to penalty misery which has lasted over a year.
The Candystripes have not had the best of times from 12 yards since Declan Devine returned to the club, scoring just twice in six attempts.

Last year, Jamie McDonagh and David Parkhouse both missed from the spot, while Junior Ogedi-Uzokwe missed twice, before scoring from the rebound each time. Eoghan Stokes was the only player successful from the spot, scoring twice. Throw in penalty shoot-out defeat to Dundalk in the EA Sports League Cup final and it's easy to see why even the award of a penalty is still met with some trepidation by the club's fans.
That history was completely unknown to Meiete of course, who showed great skill to tempt Sean Quinn into an illegal challenge. Meite swept the ball home confidently to get off the mark on his City debut.
“I knew (the tackle) was coming and I thought if I just got out behind him and a bit wide he night get a touch on me and he hammered me,” he recalled.
“As a striker everyone wants to get that first goal to get their confidence up and start scoring more. I've got my first goal so hopefully I can kick on and get a lot more now The first half we were in the game. We played well and played to our strengths and we got the penalty and tucked it away. The first half we were really strong.”
Meite has had to be patient, unable to even train with his team mates because of quarantine regulations. The striker, who was substituted early in the second half, admits he is still not at 100% fitness, but is optimistic he will be up to speed in no time.
“I'm just trying to get my body back to 100% so I'm going to work hard in training and hopefully we can get more wins,” he said.
“I'm enjoying life in Derry but to be honest the first two weeks I had to quarantine for 14 days.
“I was just chilling and training on my own, which wasn't very glamourous. I couldn't wait to get in with the boys but I have been working hard on my own so hopefully I can pick up more fitness and get going and get more goals.