City fail to build on first half lead and are punished 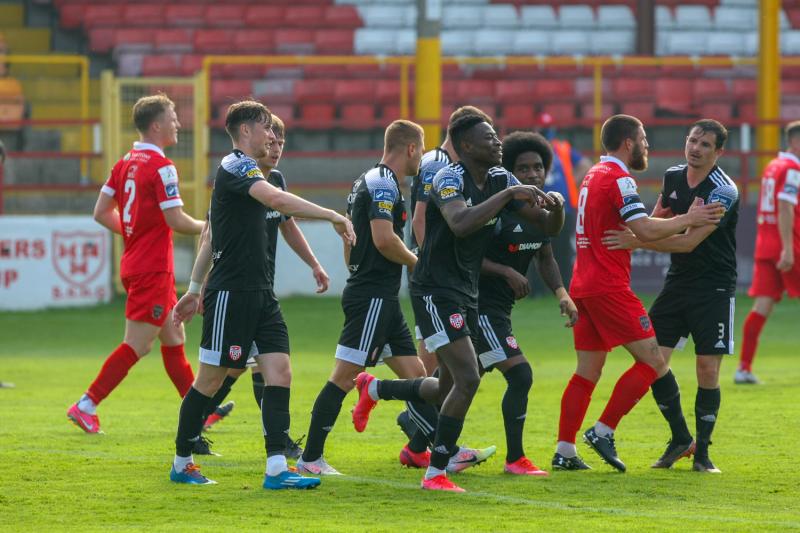 Derry City were punished for not going for the killer second goal at Tolka Park as a late Ryan Brennan header gave Shelbourne a share of the points.

The Candystripes led through a first-half Ibrahim Meite penalty but failed to build on that advantage in the second half.

Shels would have been content with their performance in the first half-hour but one moment of rashness cost the hosts dear just before the half-hour as Sean Quinn fouled Ibrahim Meite for a penalty.

There was a good build up to the foul with Coll bringing the ball out from defence and Thompson finding Horgan who came in from the right, playing the ball to the edge of the area to Figueira. The Derry man had his back to goal but he quickly flicked the ball into the path of Meite who showed great skill to turn away from Quinn to trick the Shels men into the challenge, fouling the striker, with referee Neil Doyle pointing to the spot. The striker picked himself up and fired past McCabe into the corner to give the visitors the lead.

With City unable to muster in the way of an attacking threat in the second half, Shelbourne were encouraged and they equalised on 76 minutes.

Again City were caught out from a set-play. It was so simple from Shels’ point of view as a free-kick into the area was met by substitute Ryan Brennan whose powerful downward header flew past the goalkeeper and into the net.

City’s response was good as they came so close to restoring their lead with Figueira testing McCabe and Adam Hamill striking the frame of the goal twice in as many minutes.

It was almost incessant pressure from City in the closing stages and substitute Jack Malone had his head in his hands as he got on the end of a cross from McCormack but headed over the bar with two minutes remaining.