Derry City get the job done in Dublin! 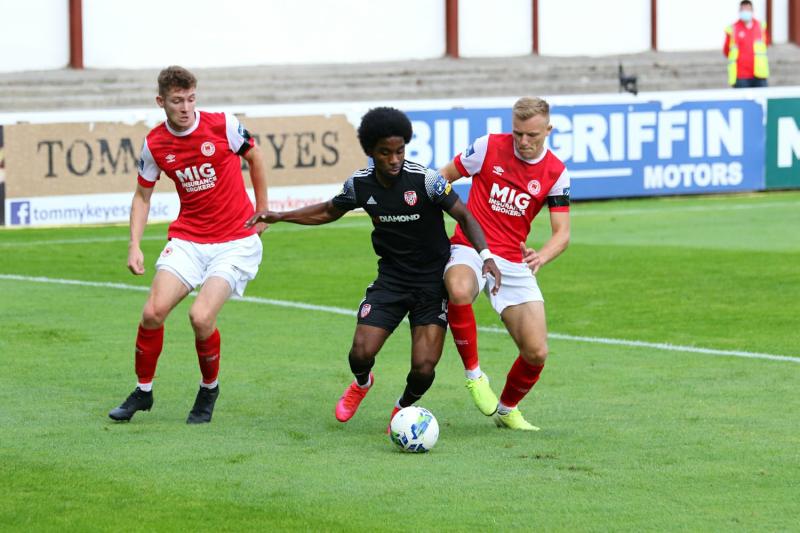 James Akintunde scored a debut goal as Derry City got back to winning ways with a fully deserved victory over St. Patrick’s Athletic.

The former Chester and Maidenhead forward, who missed the defeat to Sligo Rovers at the weekend, opened the scoring at the start of the second half, after which captain Conor McCormack sealed the points with his first goal for the club in over four years.

This was a much-improved Derry City display as they showed more hunger and desire and ultimately more threat against a St. Pat’s team who thoroughly disappointed.

Declan Devine made three changes to the team which wilted against Sligo Rovers, Colm Horgan and Jack Malone starting, whilst James Akintunde made his Candystripes debut. For St. Pat’s, there was a debut for former City player and recent target Georgie Kelly, with the hosts looking to build on their impressive performance and result against Dundalk.

There was a lively start from both teams with Robbie Benson bringing a good save from Pater Cherrie with an effort from 20 yards, before Gerardo Bruna tested Brendan Clarke from a similar distance.

At the other end, all eyes were on Akintunde on his debut and whilst the first 20 minutes passed him by, he was heavily involved in creating a chance for his team when he worked his way in from the right before finding Conor McCormack, who set up Joe Thomson for a curling 20-yard shot which just ailed wide of Brendan Clarke’s upright.

Walter Figueira came even closer just minutes later, collecting the ball 25 yards from goal before trying an ambitious effort which had Clarke scrambling across his goal before it flashed just wide of the post.

The second half began perfectly for Derry City who took the lead with their first serious attack. Colm Horgan did well to bring the ball down the right and he fed the supporting Jack Malone, who placed a low cross into the heart of the penalty area where James Akintunde was on hand to direct the ball past Clarke and into the net for a debut goal.

The next goal in this one was so important and it went the way of the visitors who punished a St. Pat’s mistake ruthlessly. Luke McNally gave the ball away deep in his own half and Figueira latched onto it before driving towards goal. The City playmaker got in the vicinity of the Pat’s area before leaving it for Conor McCormack, the midfielder skilfully curling the ball around Brendan Clarke and into the corner from 20 yards to double his team’s lead with just over 15 minutes remaining.

City held firm in the closing stages to give them three very valuable points ahead of the weekend game against league leaders Shamrock Rovers.