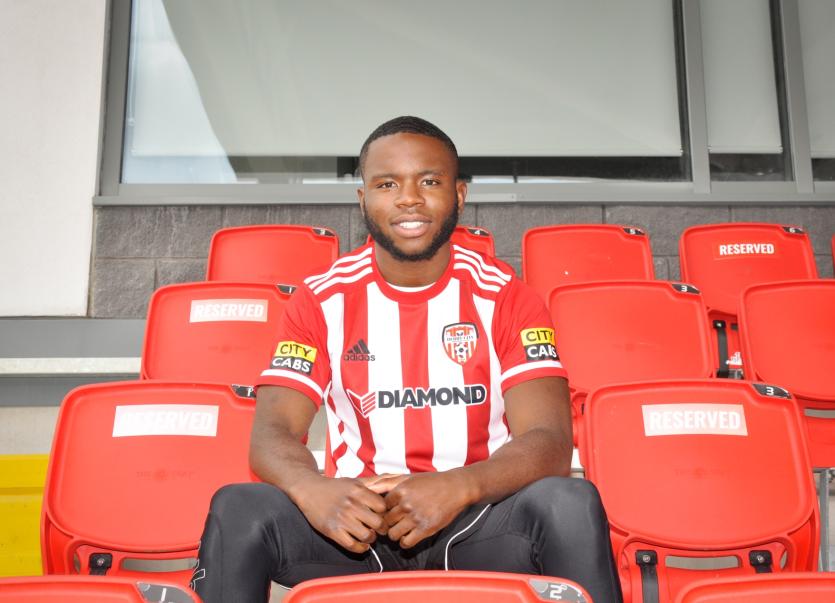 New Derry City forward signing James Akintunde has revealed that Junior Ogedi-Uzokwe was a key reason behind his move to Derry City.
A lifelong friend of Junior, James is now hoping to follow in his footsteps with a successful stint at the Brandywell for what remains of the 2020 season. Junior was relagtively unknown when he came to Derry at the start of 2019, but finished the season as the League of Ireland's top scorer. James is using that story as inspiration for himself.
“Junior is from my area and lived close to me so we grew up together,” he explained.
“He actually spoke to me about it and he said it was a really good opportunity and suggested I give it a go. We played football with each other during the break so we talked about it. He went to Derry and got a lot of goals and loved it there, and I'm hoping that the same can happen for me. I just want to help get the team into a high a position in the table as possible.”
Akintunde played in City's recent 0-0 with Cliftonville and is a player that can play anywhere across a front three. A forward for Chester in the past, the 24-year old then spent most of his time out wide at Maidenhead, yet he does have a preference where he plays.
“I prefer to play down the middle but most of my playing career I've played out wide,” he said.
“I can adapt, and I don't mind playing there but my preferred position is down the middle. I've spoken with Declan about this and he said he'll play me across the front three but just as long as I get my chance I'm happy. As long as I'm playing well and the team is doing well, then that's all that matters.”
With Tim Nilsen departing the club recently, City are short in attacking options with the resumption of the league season just a few days away. That fact could work in Akintunde's favour and he insists he has no qualms about taking responsibility for goals in the team.
“I class myself as a centre forward so that's no problem,” he continued. “I've trained with the players and they are all quite versatile and it's good to have that. We can all move about together. It would be good to start against Sligo and hit the ground running, but we'll just have to wait and see who the gaffer picks.
“I'm really enjoying it so far. The team mates have been good, the staff have been good and the facilities are great. Ever since I got here it's been good and the training has been high intensity.”